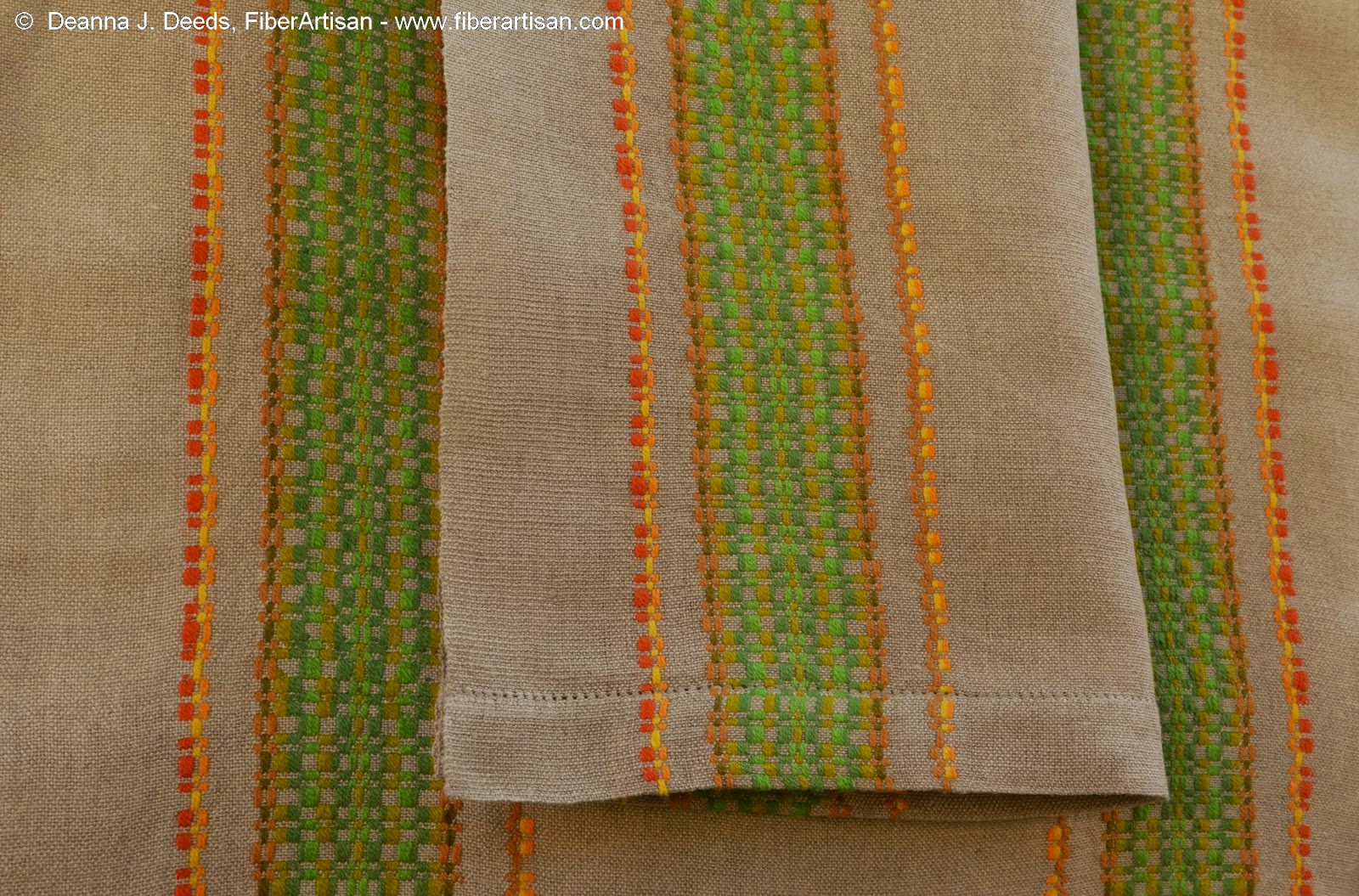 September's towels are woven, hemmed, wet-finished and ready for service. 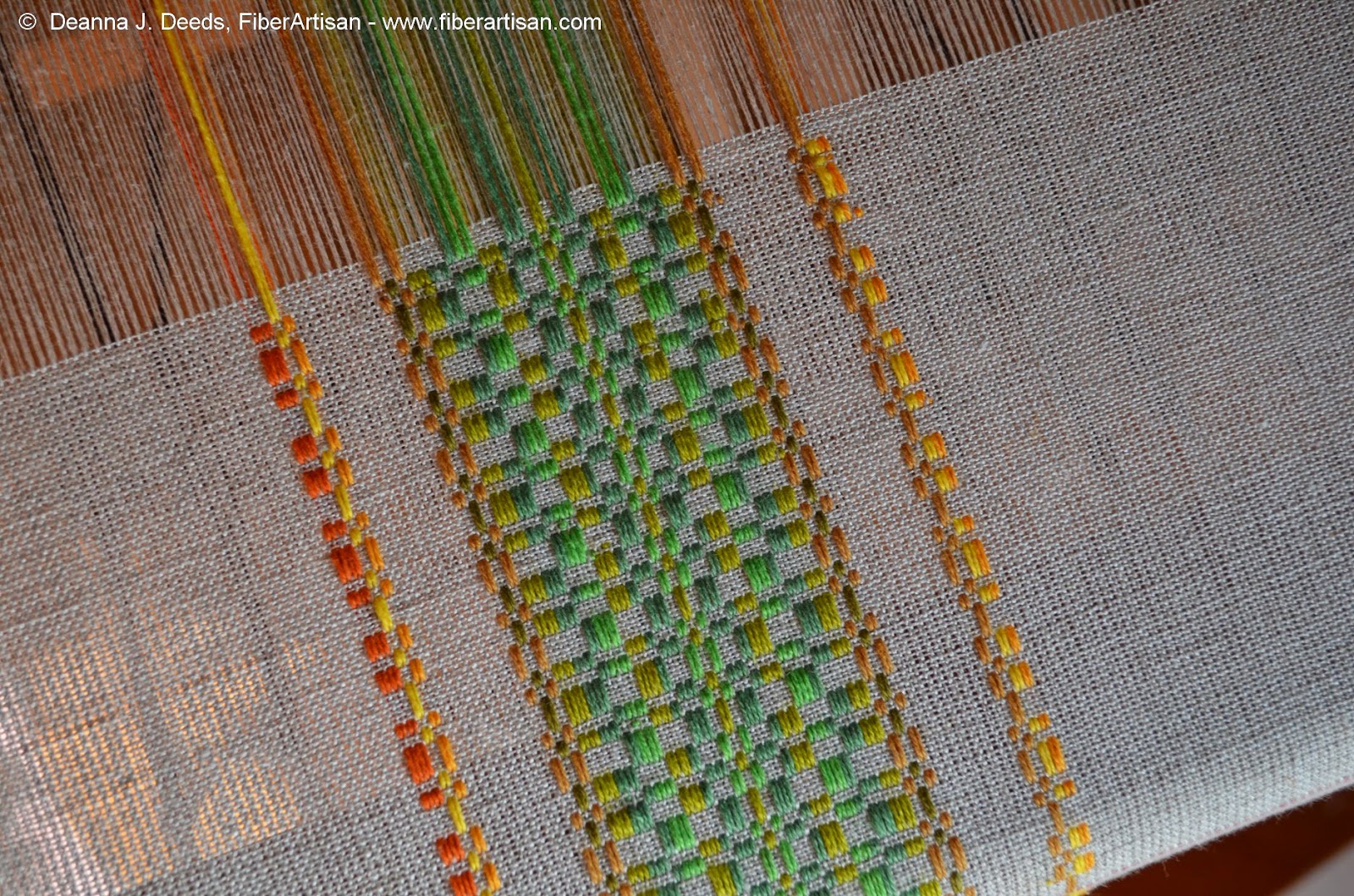 In weaving the turned monk's belt, I was having difficulty getting a nice shed to open because the warp is so dense.  The pattern warps also would sometimes sit on the "wrong" side of their companion ground warp which would put a spot of color in a position that I think doesn't look right.

I developed a sequence that helped me get through this problem.  Instead of using the tie-up as provided, I tied up the pattern shafts as a direct-tie, and the shafts that weave plain weave separately, plus a treadle to lift all the ground threads together.  So for each change of pattern block the weaving sequence is:

2. Push the beater back.  Clear the shed with a sword, bringing the pattern threads up to the fell so they sit up above the cloth and in between the proper ground threads.

3. With the top pattern threads still raised and the beater again at the fell, with the other foot raise both ground shafts.

4. Push the beater back and repeat the shed-clearing with the pattern threads that are on the reverse of the fabric, so they sit down below the cloth and between their proper ground threads.

5. Lowering the ground threads but leaving the top pattern threads still raised, weave however many picks are required according to the treadling pattern.

This is slow going, but I was such a happier weaver doing it this way!

Posted by Deanna Deeds at 4:49 PM No comments:

September TotM - Sett and Yarns - some color for end of summer! 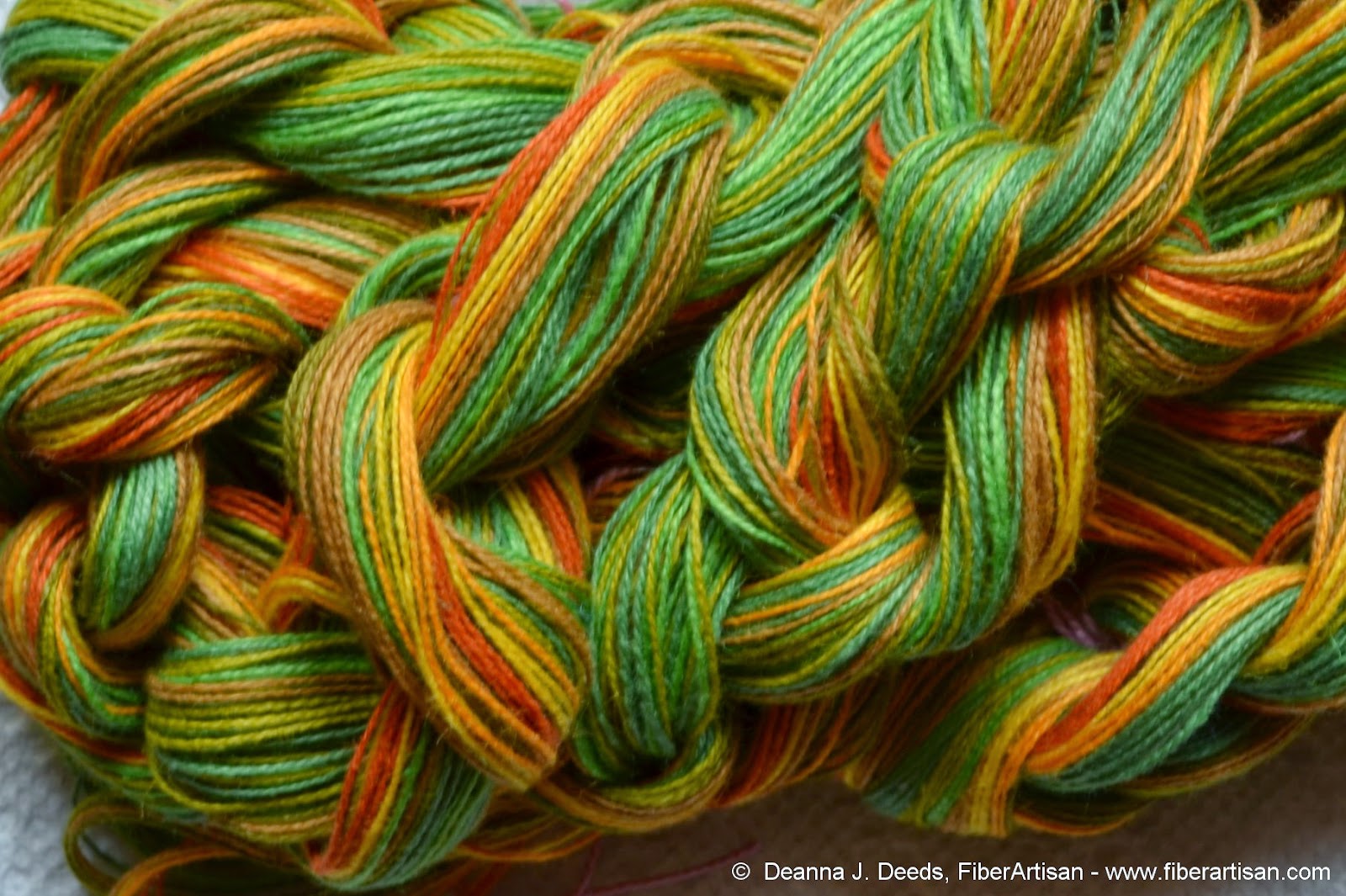 Here are the colors of pattern warp that I picked out based on the color names in the article and yarns available to me.  Don't they make a pretty late-summer-harvest kind of palette?  I got this 22/2 cottolin from Yarn Barn of KS.  The ground warp is a 40/2 linen like the earlier towels, and the Barrett article calls for unbleached.

I was so intent on trying to explain the draft in my last post, I neglected to mention that this towel is set at 30 ends per inch, just like all the previous towels so far this year.  At least, the linen ground warp is at 30 ends per inch, and the total linen ends are 570 ends for an in-reed width of 19".  In the colored pattern stripe areas, the pattern warp is a supplementary warp - that is, it is not a part of the basic plain weave ground cloth that the linen forms - so it goes in right on top of the 30 epi linen, one pattern thread per ground thread.  So in the pattern areas, the sett is actually 60 ends per inch.

I wound and beamed this pattern warp separate from the ground linen.  For most of the colors you'll wind a few ends, then cut and tie off and start the next color.  But if you're using a warping board or pegs, for colors that repeat near each other like all those greens in the center of the main stripe, you can set the yarn package aside while you wind the other colors if you like, then return to the color set aside as you need it again.
Posted by Deanna Deeds at 3:07 PM No comments:

A New Look for Atwater-Bronson Lace? 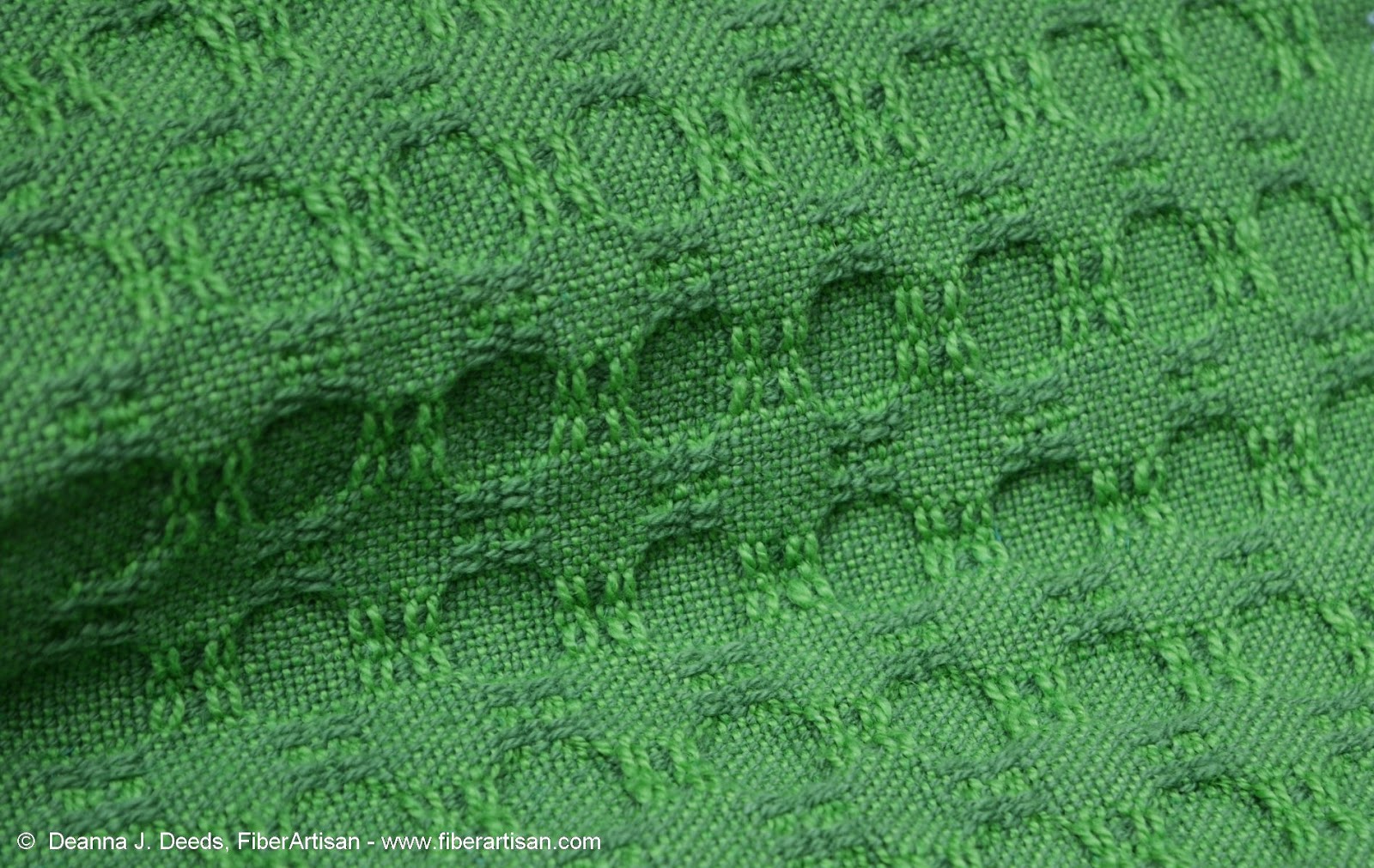 Can you believe this is the same structure as the May Towel of the Month?  Who knew Lace Bronson (aka Atwater-Bronson) could take on a three-dimensional look almost like a waffle?

To get this result, instead of threading 14 units of Bronson and one unit "turned" as in the May towel, I tried threading 2 units of the lace alternating with 2 units of the turned lace.  I wove similarly, 2 repeats of each treadling sequence alternately. 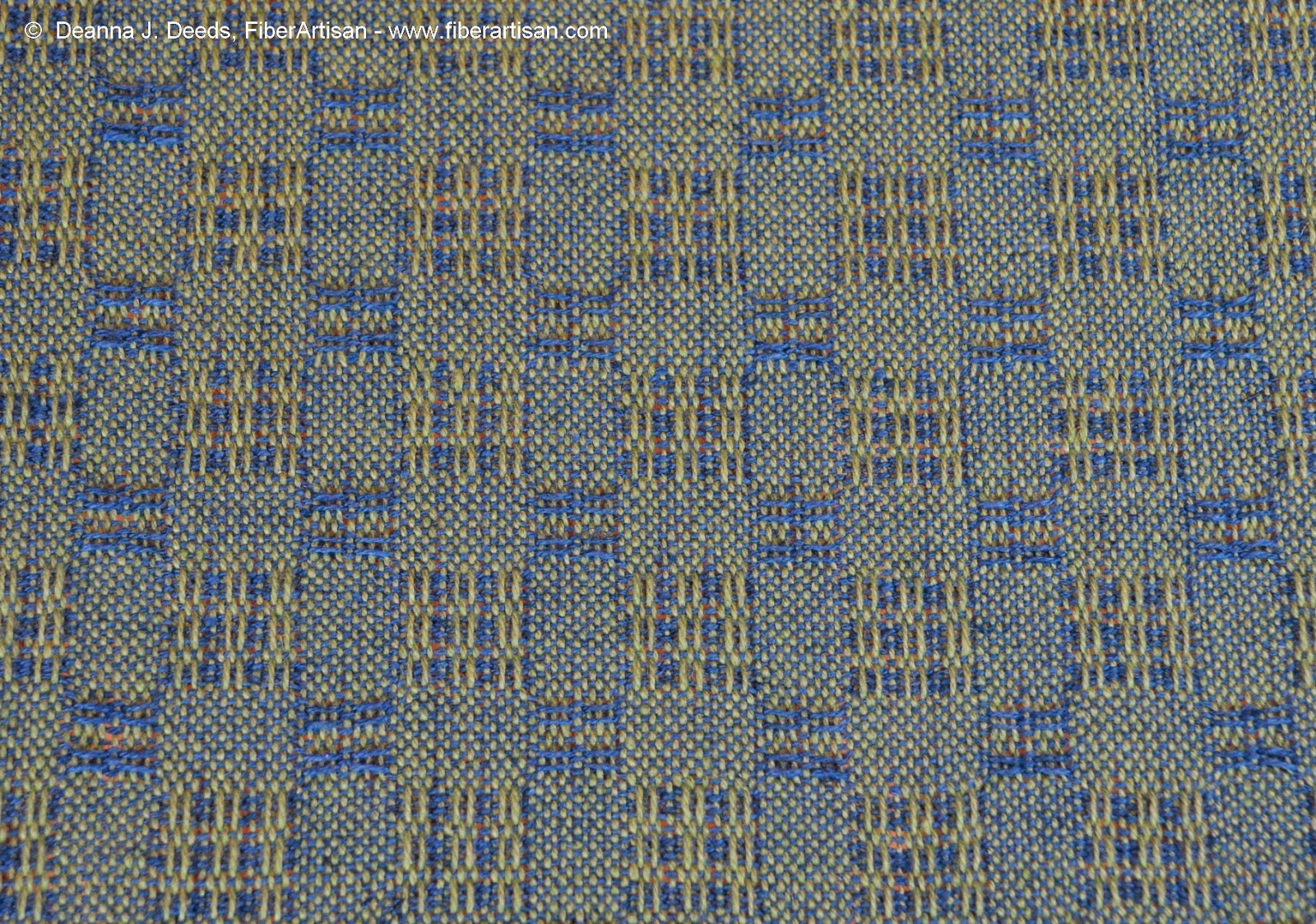 This is another sample, 2 units of lace threading alternating with 3 of the turned.  You can see that the fabric is not anything special to look at, under tension on the loom. 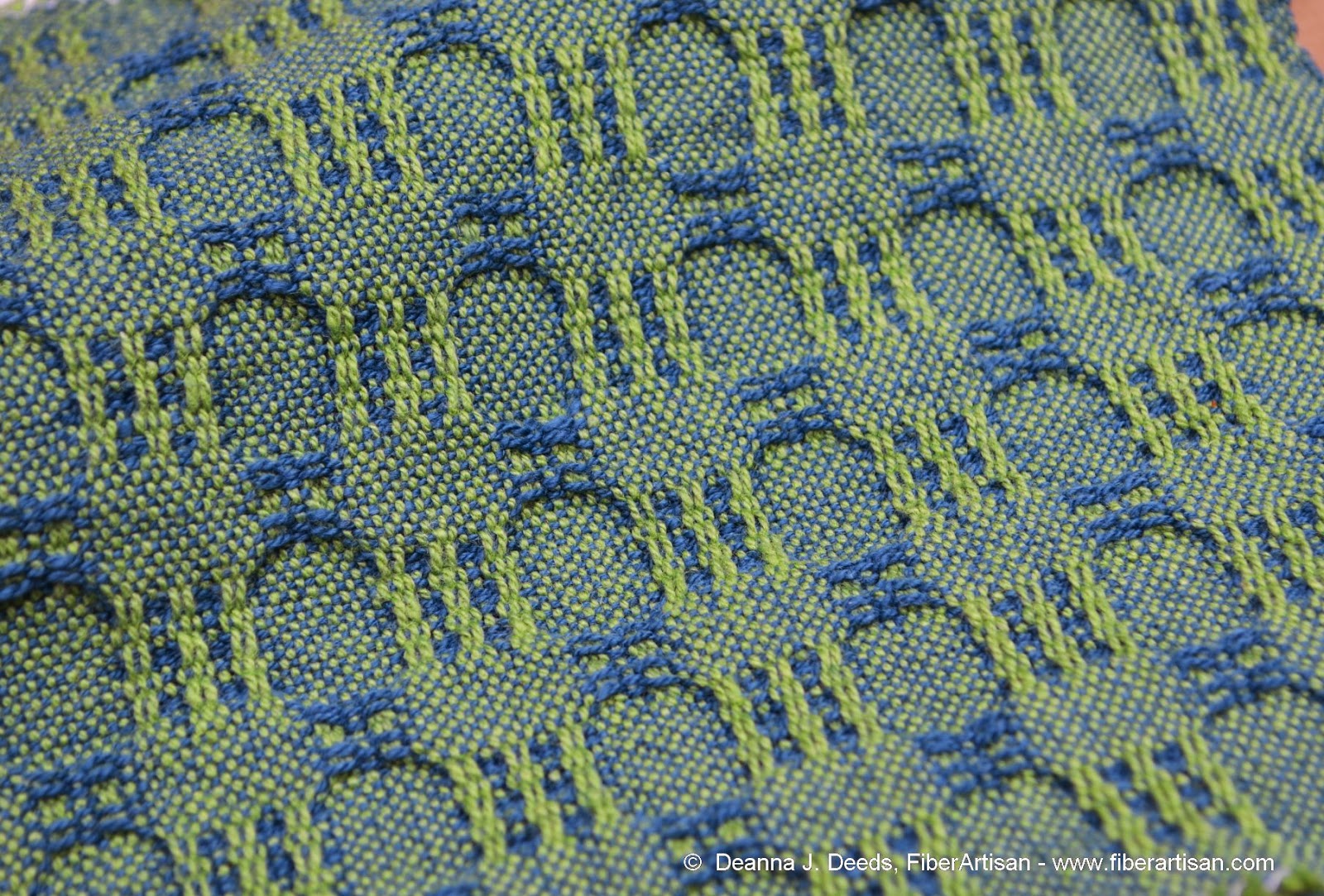 But what a surprise I had when I put the sample into water to wet finish them!  Had anyone walked into my kitchen they would have found me standing there grinning at the sink, almost bouncing up and down in delight.

The effect seems to be caused by the floats in the two directions all pulling the plain weave areas to one side of the fabric or the other when the yarns are allowed to relax in the water.
Posted by Deanna Deeds at 7:35 AM No comments: 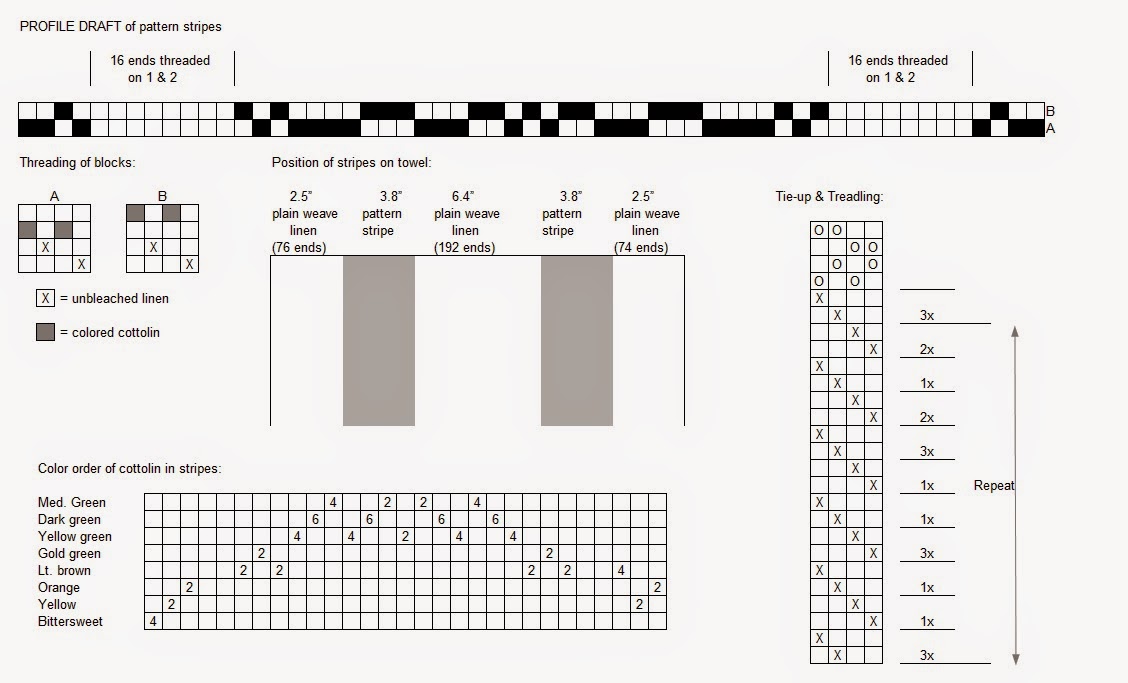 The weave for the Towel of the Month for September is another "turned" structure: that is, it's woven with the patterning in the warp, whereas the "normal" way to weave it is with the pattern formed in the weft.  This design also has some color in it ("yay - finally!" say the color-lovers, after looking at all those natural-colored linen lace weaves).  The ground warp and the weft are unbleached linen, and I am using 22/2 cottolin as the colored pattern warp.

The draft looks a little complicated, but I've tried to add a few labels to fill in the blanks.  Start by looking at the center of the diagram, where there is a sketch of the width of the towel.  From right to left, there will be 74 ends of linen threaded on shafts 1 and 2 to weave plain weave, then a stripe of the pattern, then a central area of linen plain weave, another stripe, and finally 76 ends of plain weave.

The profile draft for the stripes is at the top of the diagram.  Each square represents a sequence of 4 threads, two linen and two pattern.  From right to left, thread two units of block A, then one of B and so on.  The threading for the two blocks A and B are at the left in the diagram.  When you are sleying the reed, the pattern stripes will be sleyed double the density of the plain weave portions: if you are using a 15-dent reed, all 4 threads go in one dent.

The colors of the cottolin are indicated at the bottom.  I wasn't sure what color "bittersweet" was, so I looked it up and it seems to be a salmony orange.  Notice that although the threading of the stripe is symmetrical, the color order is not, so reverse the order for the second stripe.   Since this is a supplementary warp, you may want to beam the cottolin separately from the linen if you have a second warp beam.

Posted by Deanna Deeds at 9:17 AM No comments: