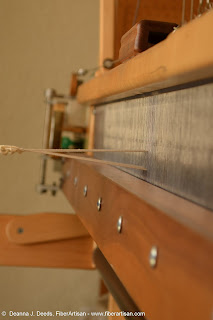 Continuing the experiment, here are the sheds I can get on the AVL, which has a smaller shed than the Macomber.  Using top doups, crossed shed. 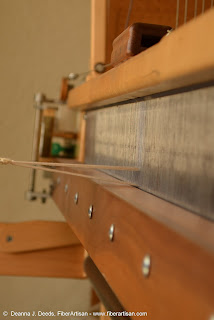 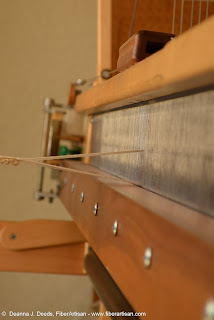 The normal shed opening for this loom with the top doups installed. 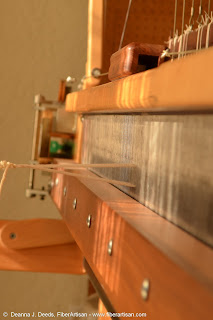 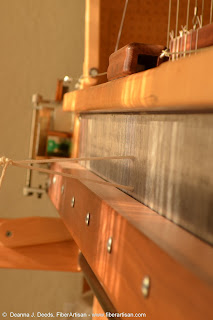 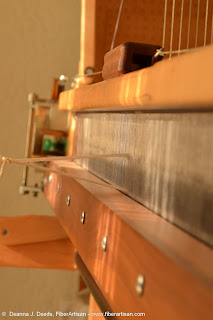 The normal shed opening for this loom with the bottom doups installed.

Posted by Deanna Deeds at 9:52 AM No comments: 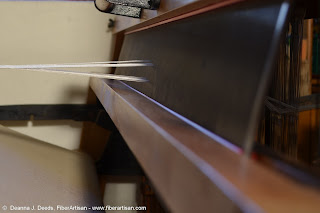 The first in a series of experiments comparing top-mounted doup heddles to bottom-mounted.  This experiment is on my Macomber loom.  The first photo is using the top-mounted doups, the shed where the doup warp end is crossed under the ground (stationary) end.  You can just barely see the crossing going on in the shadows behind the reed.  The lower warp ends have lifted well off the shuttle race and the shed is small compared to what the loom usually produces. 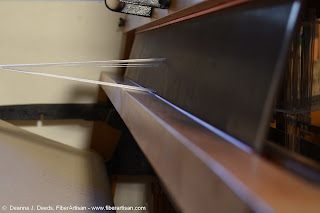 The second photo is still the top-mounted, with the shed open where the doup warp is raised on the usual side of the ground, uncrossing the warps.  The shed is larger and the lower warp ends are still on the shuttle race.  But it's not as large as the normal shed on this loom, because the doups are deflecting the upper warp ends a little.  Again looking in the shadows reveals this deflection. 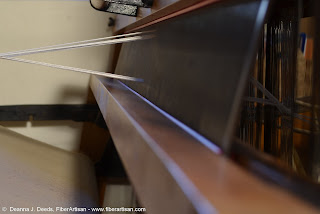 In the third photo, I rethreaded the loom using bottom-mounted doups instead.  The crossing shed is much larger than the one using top-mounted, but the lower warps are still lifted off the shuttle race.  I've found that on this loom I can alleviate this by not pushing the treadle all the way down to the floor. 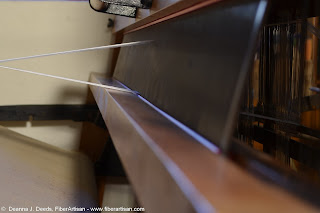 The fourth photo is bottom-mounted doups, uncrossing shed.  This shed is the same nice large shed that the loom produces in normal weaving without doup heddles, because the bottom-mounted doups don't interfere at all with this shed.
Posted by Deanna Deeds at 3:44 PM No comments: 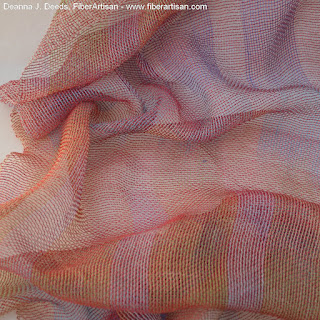 One of the scarves I wove in this series - they're all iridescing (is that a word?), but this photo shows it up the most.
Posted by Deanna Deeds at 5:45 PM 1 comment: