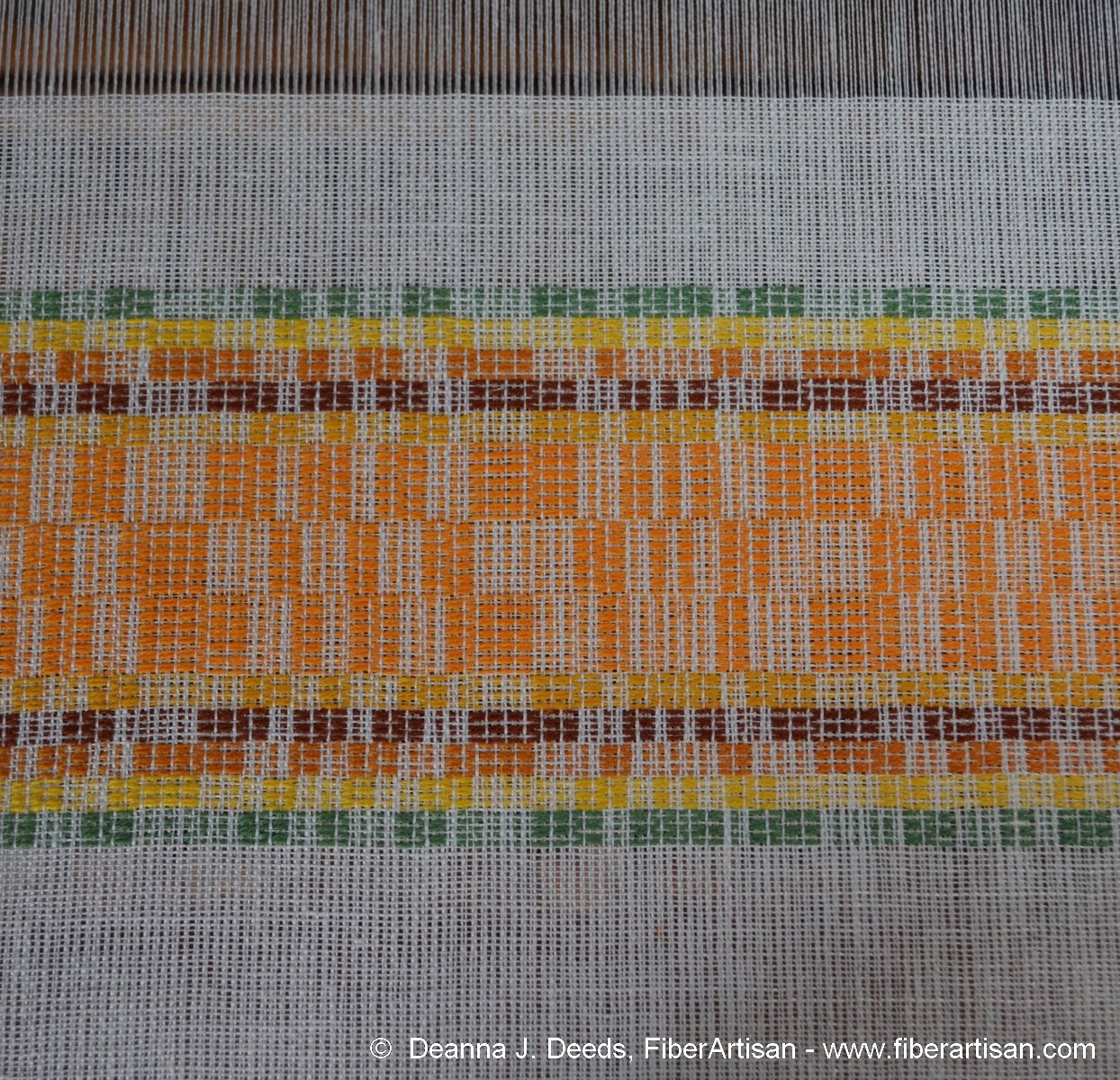 No, I haven't abandoned the Towel of the Month (though this month seemed pretty full up with getting ready for the Designing Weavers sale).  Here's a photo of November's towel as it was being woven.  I must say I don't really "get" crackle weave.  It seems to have all the blurriness of overshot and none of the pattern.  I'm not sure it's worth the complicated threading.  I know there are other ways to weave it besides this overshot method using tabby, including polychrome, so I may have to return to it again some day. 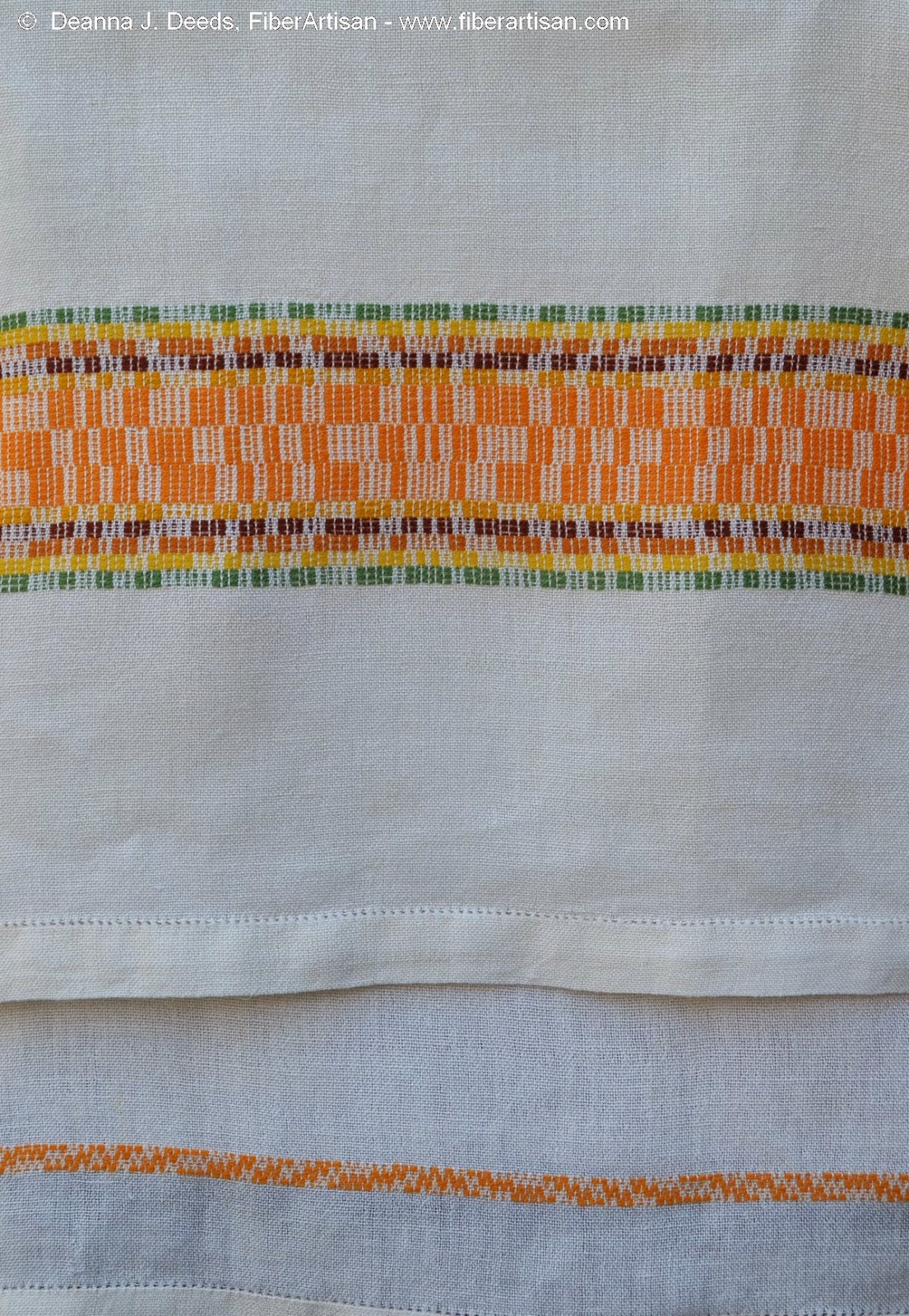 I do like the colors in this towel, though!  Here's the finished towel.
Posted by Deanna Deeds at 6:04 AM No comments: Links to this post

In time for shopping season? 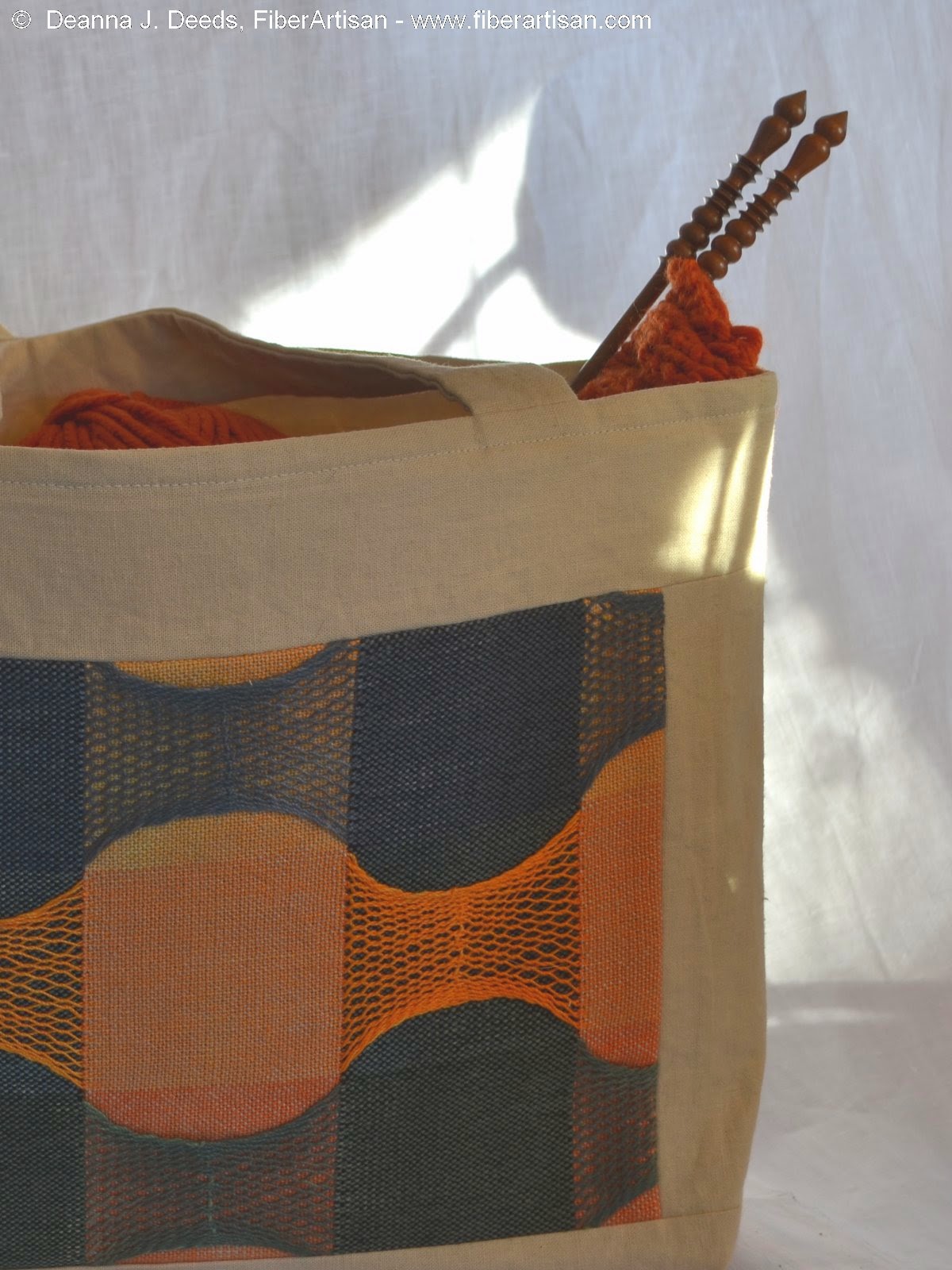 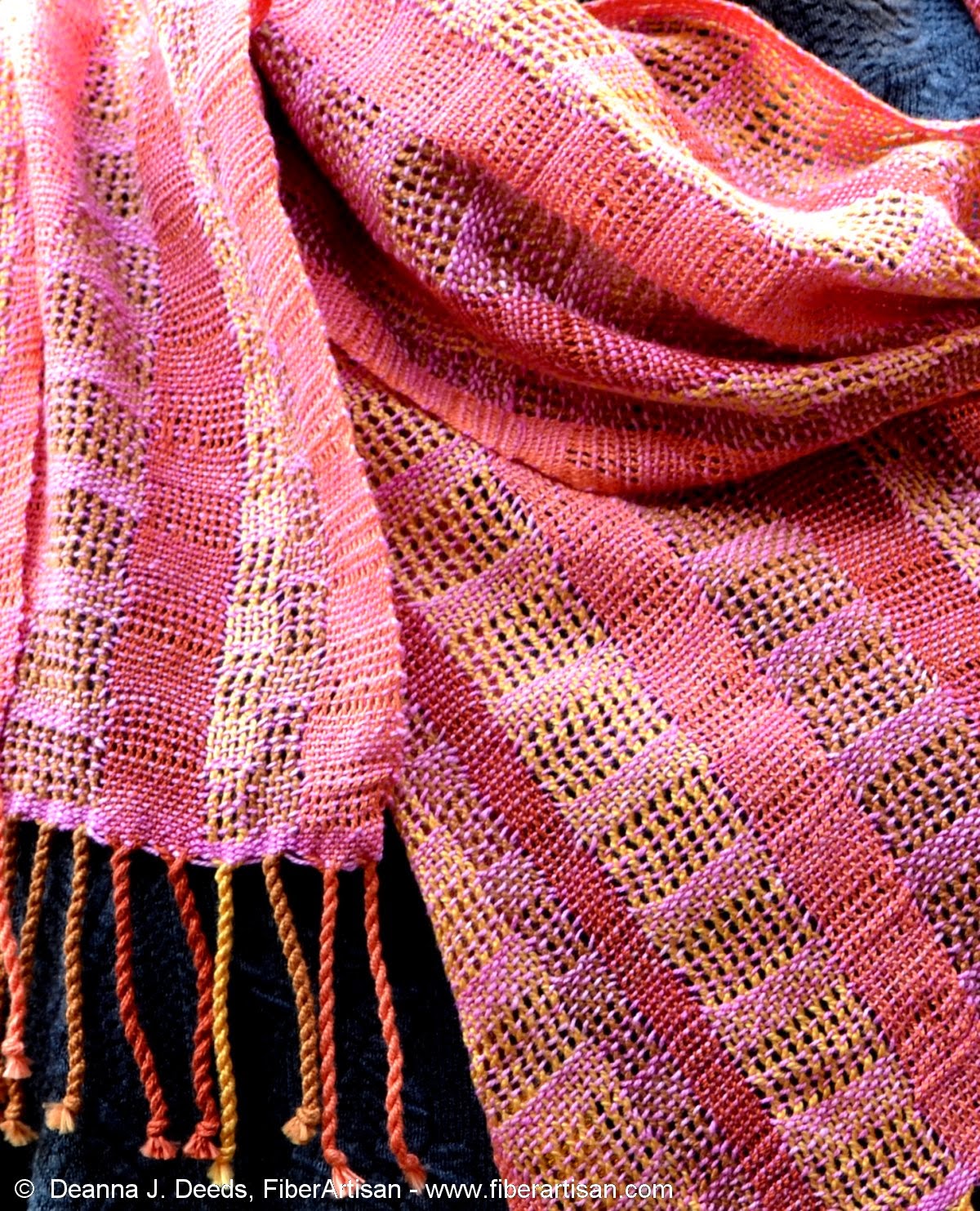 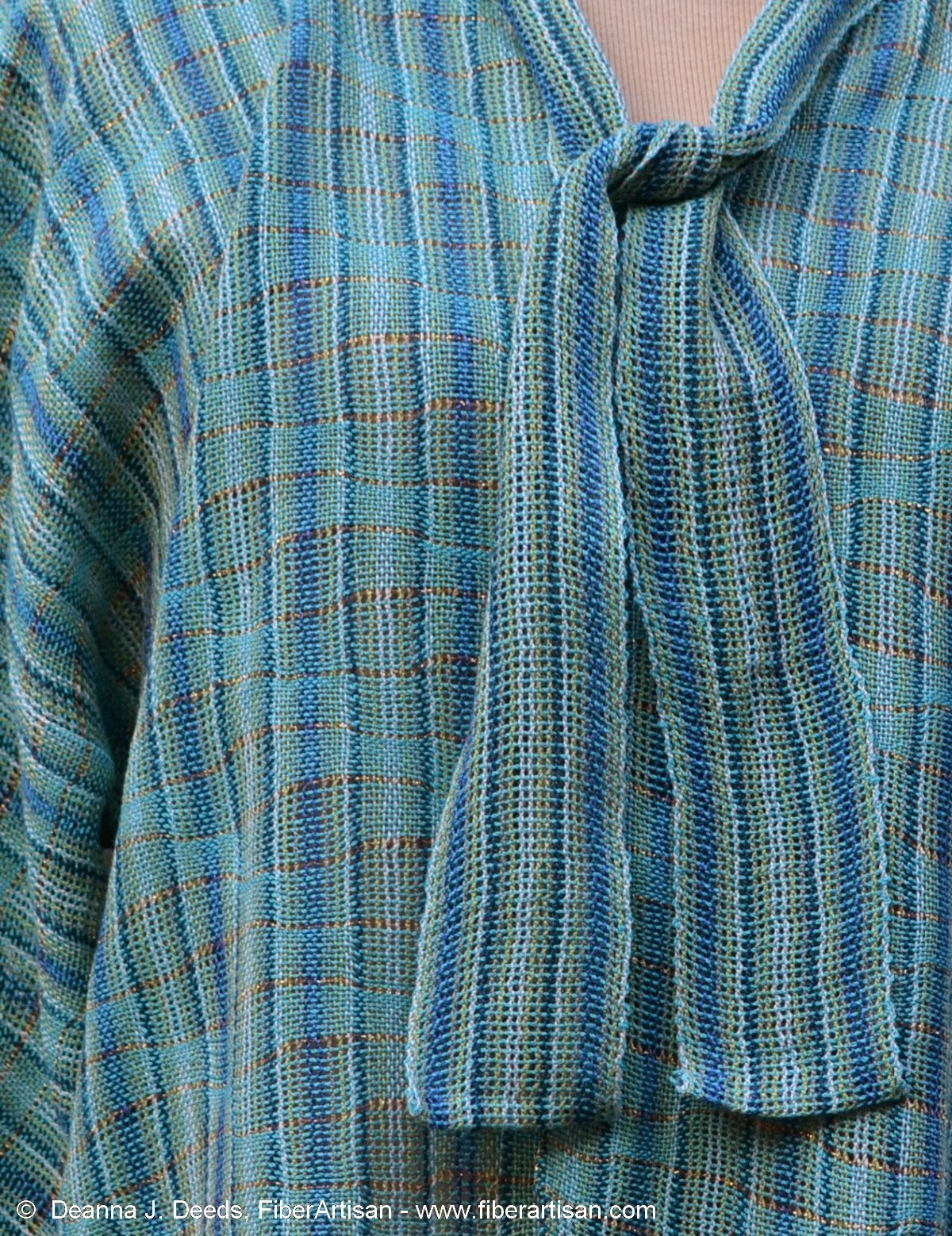 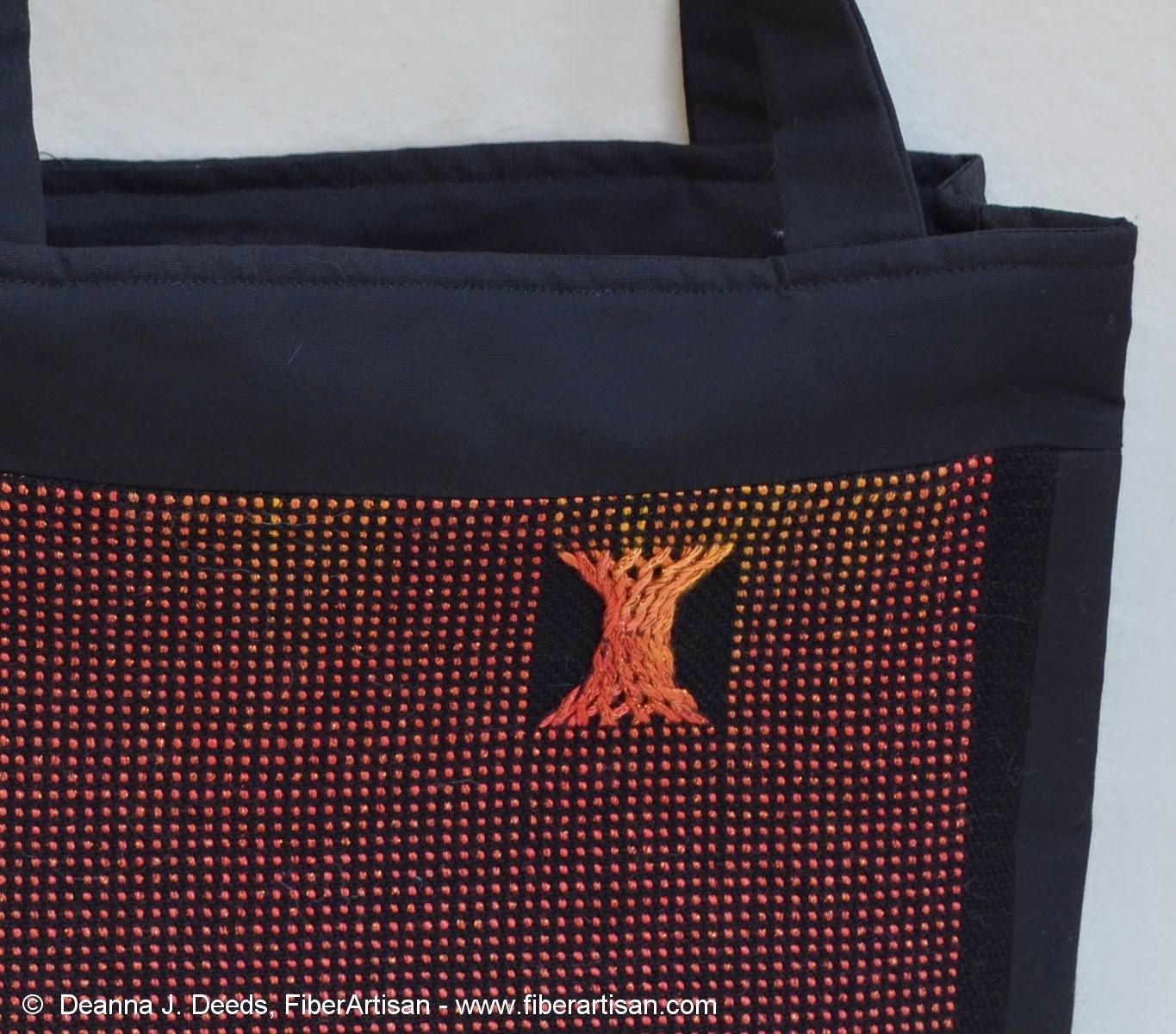 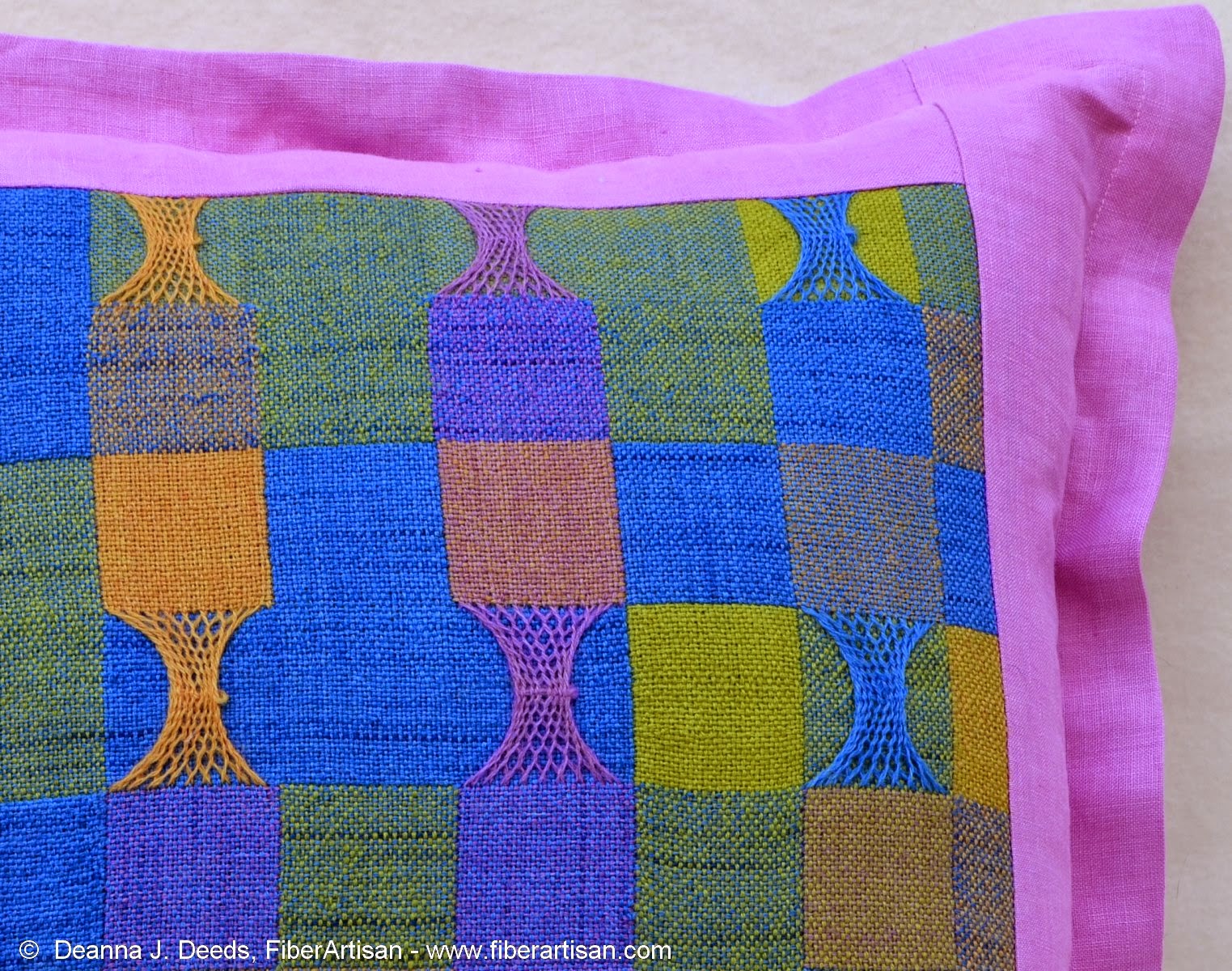 Posted by Deanna Deeds at 6:01 AM No comments: Links to this post 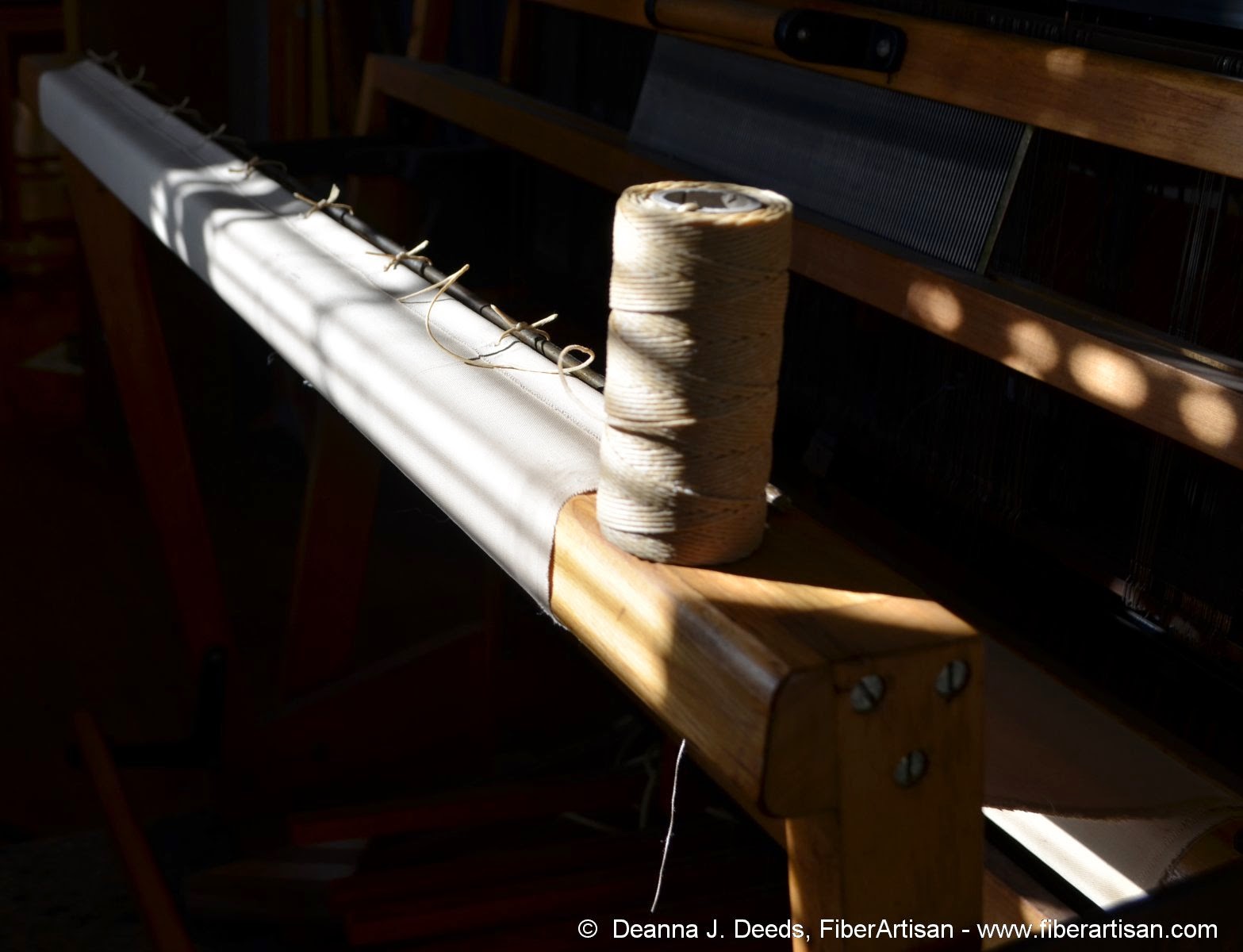 Well, here's a project for a late November day. 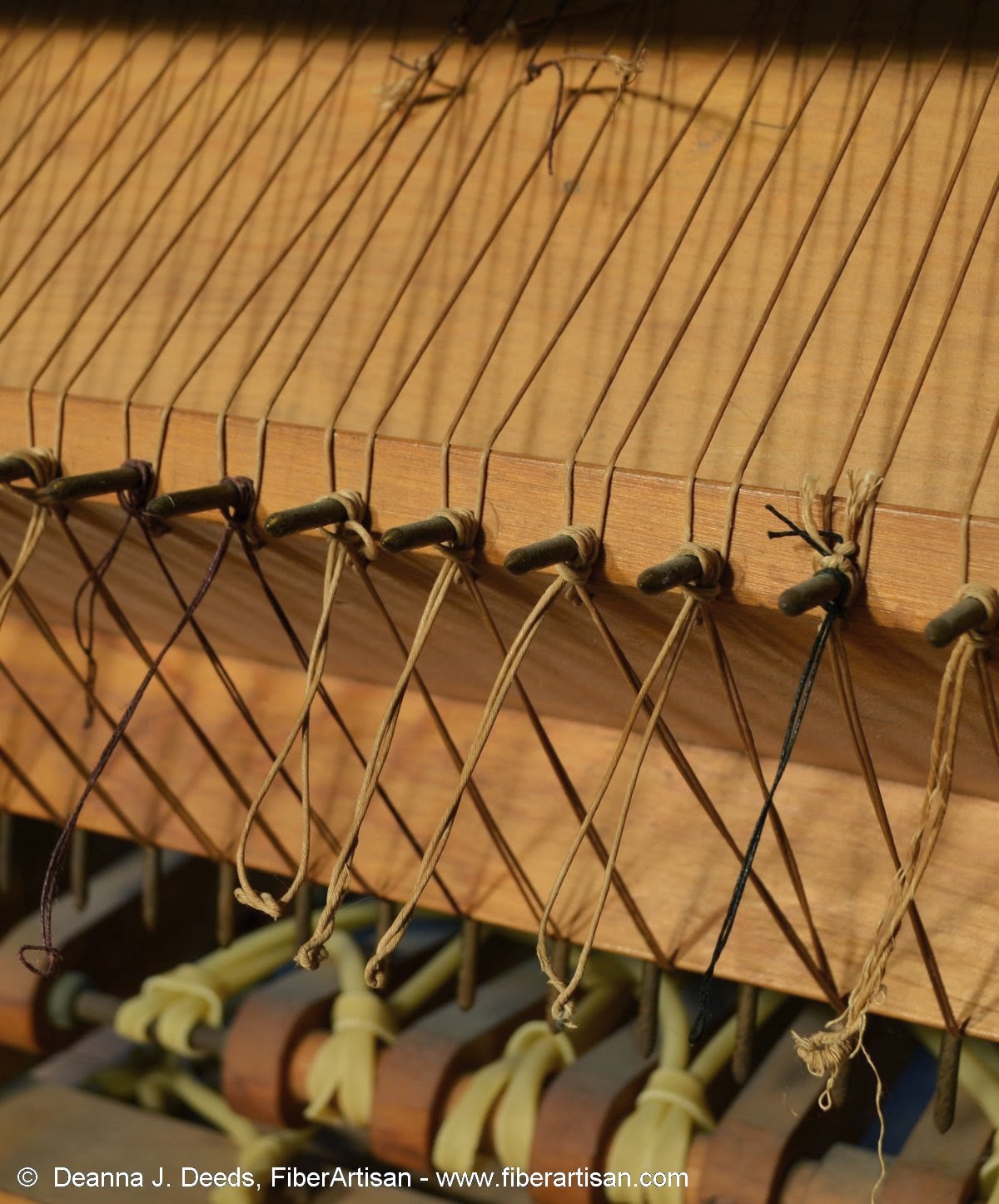 For a while now, I've been wanting to replace the apron strings on the warp beams on my Macomber loom.  These are the leader strings that the warp is tied to in the sectional beaming process.  Every time I would put a new warp on, I would cross my fingers and hold my breath, hoping that one more of these frayed strings would not break.

You can see some in the picture where I have tied in an extension with some waxed linen that was the wrong weight. 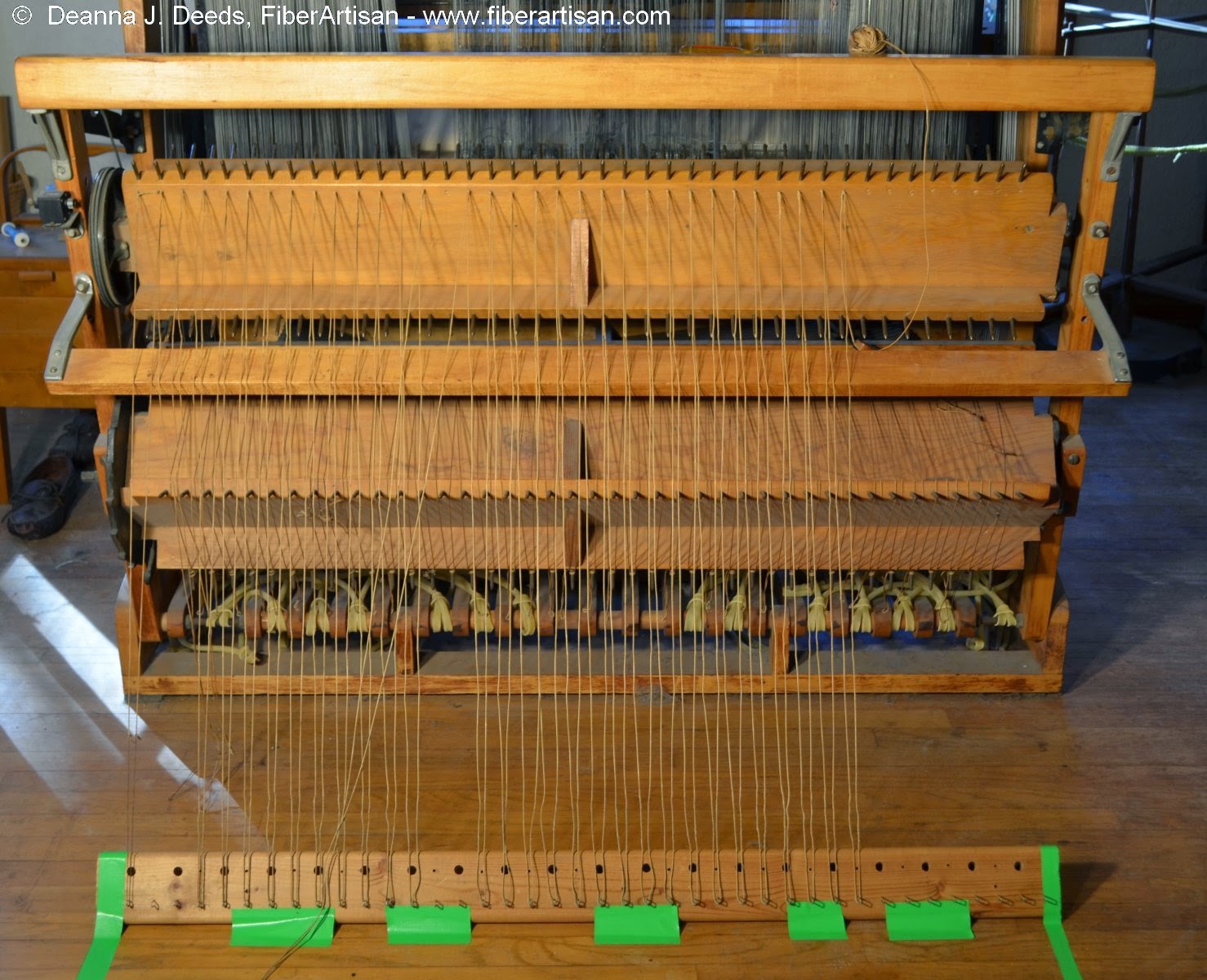 After looking at how Eddie of Macomber Looms re-strings a plain warp beam, I decided I ought to rig up some way to measure the strings as I was putting them on, to get them all approximately the same length.  This is the jig I came up with.  I used the board that I have been using a raddle with my other loom, duct-taped (aka duck tape) to the floor at an angle.  I placed it so that the old strings went around each nail.  Here I've started to take the old strings off. 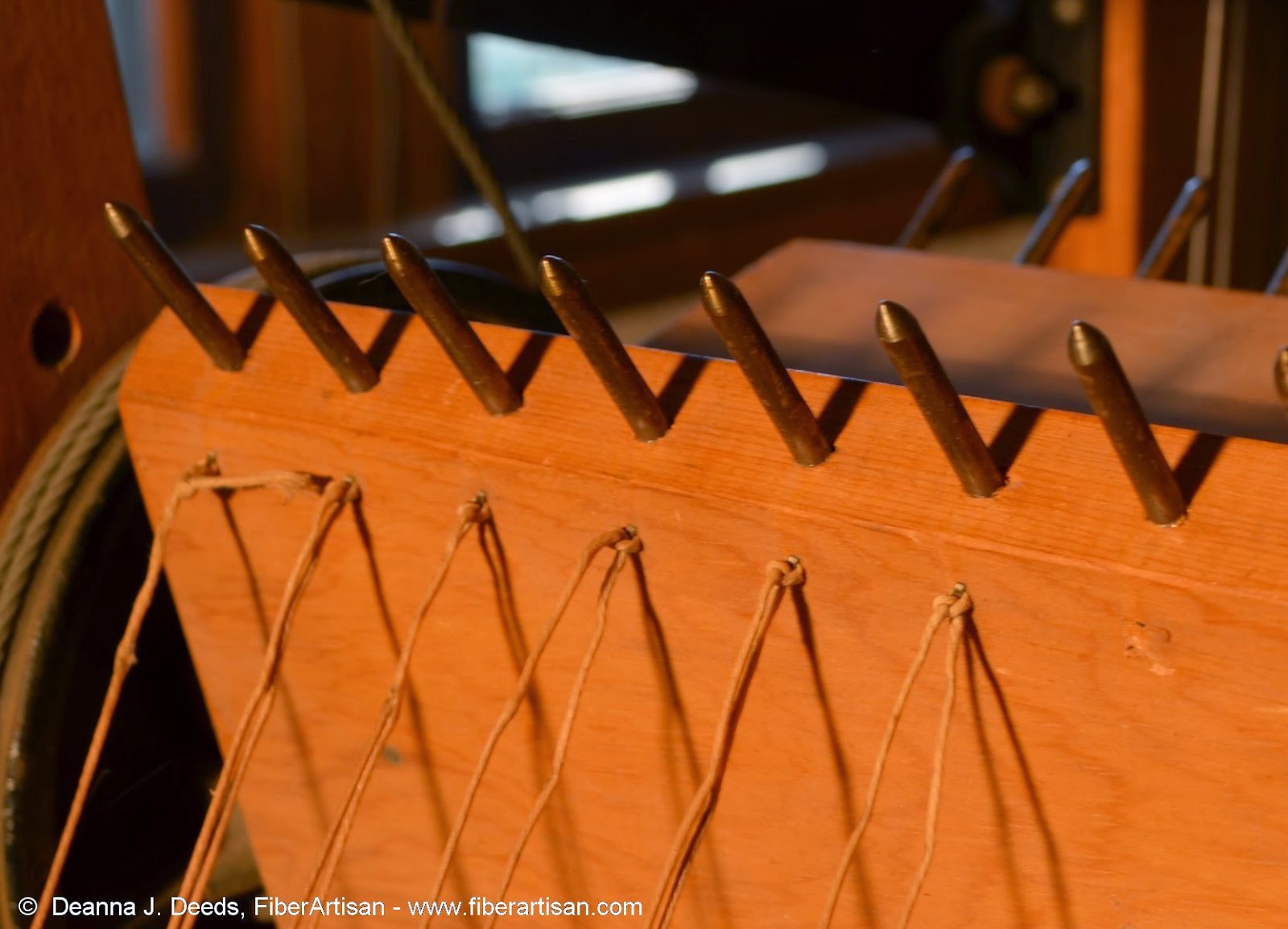 The strings were actually one long continuous string, attached with small staples, and a half hitch knot.  This is a picture of the old strings before I took them all off.  I wasn't able to pry out those staples without gouging the wood of the beam somewhat. 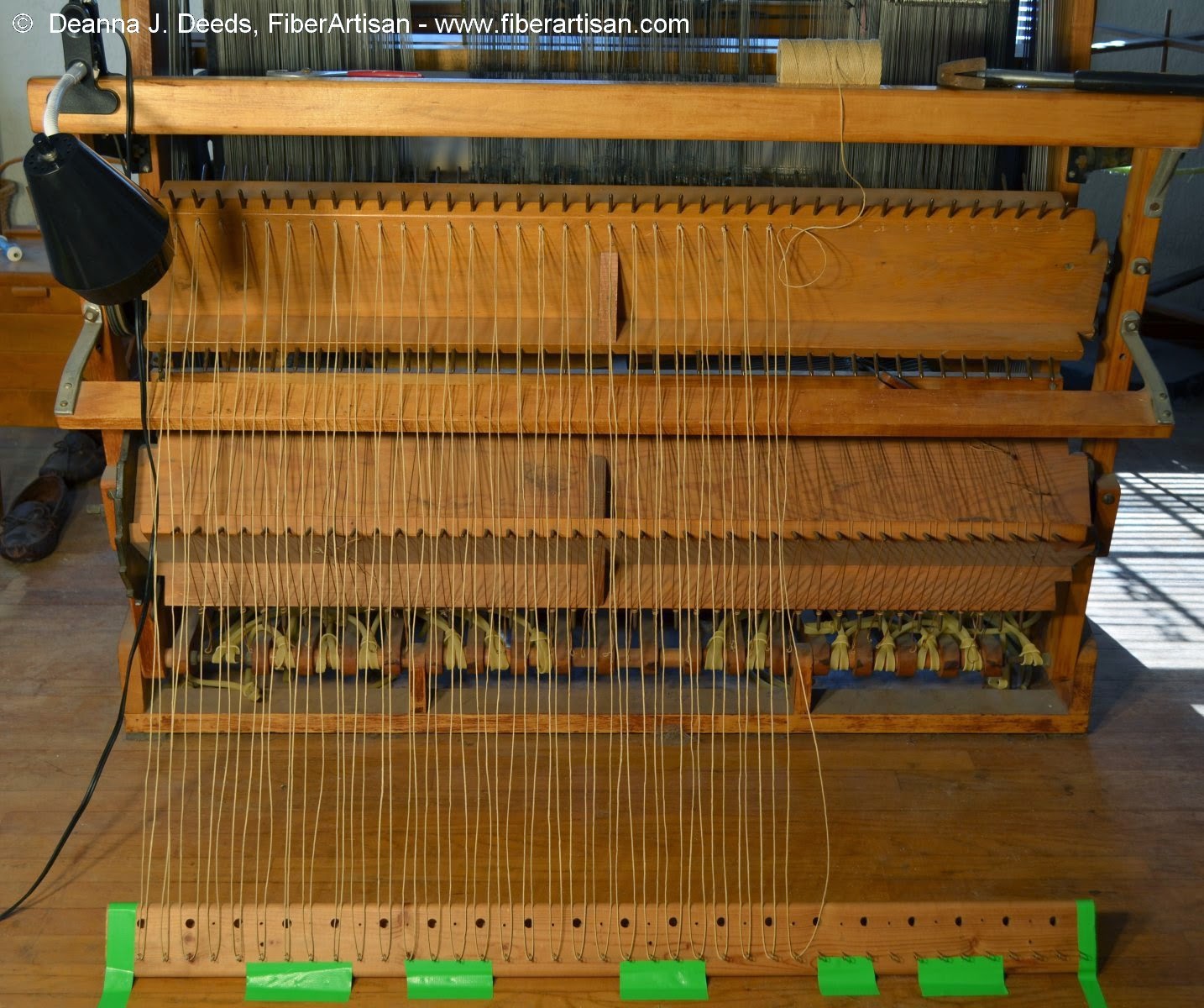 Then I used the jig to measure the length of each loop of string, stapling each and tying the knots as I went across.

Then I repeated the whole process with the bottom beam. 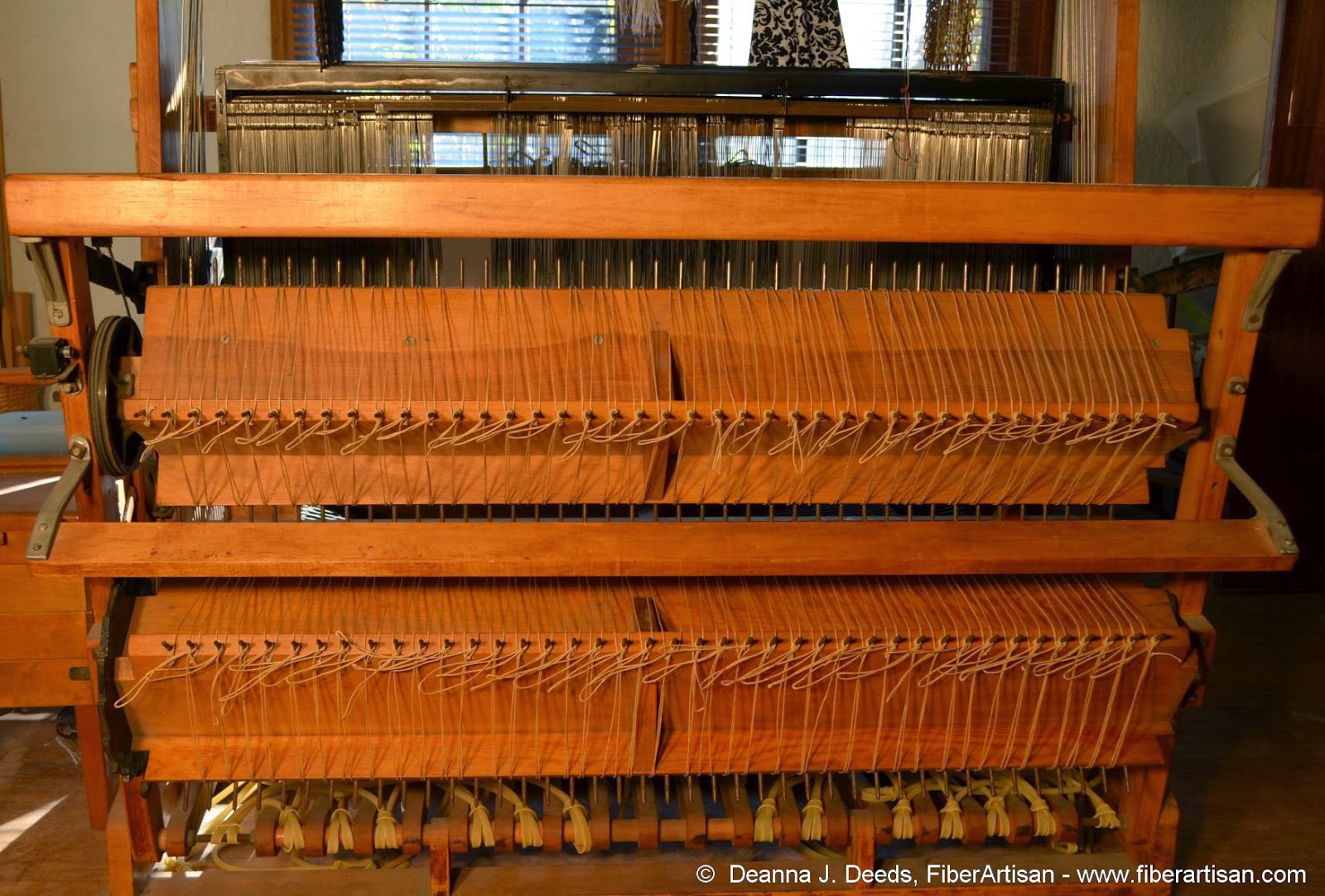 ...and yay!  New apron strings for my sectional warp beams!  Hopefully they will last as long as the first set, which was over 50 years if these beams are original to the loom.

I also replaced the little ties that hold the front tie-on rod to the cloth beam apron (first photo above).
Posted by Deanna Deeds at 4:31 PM No comments: Links to this post 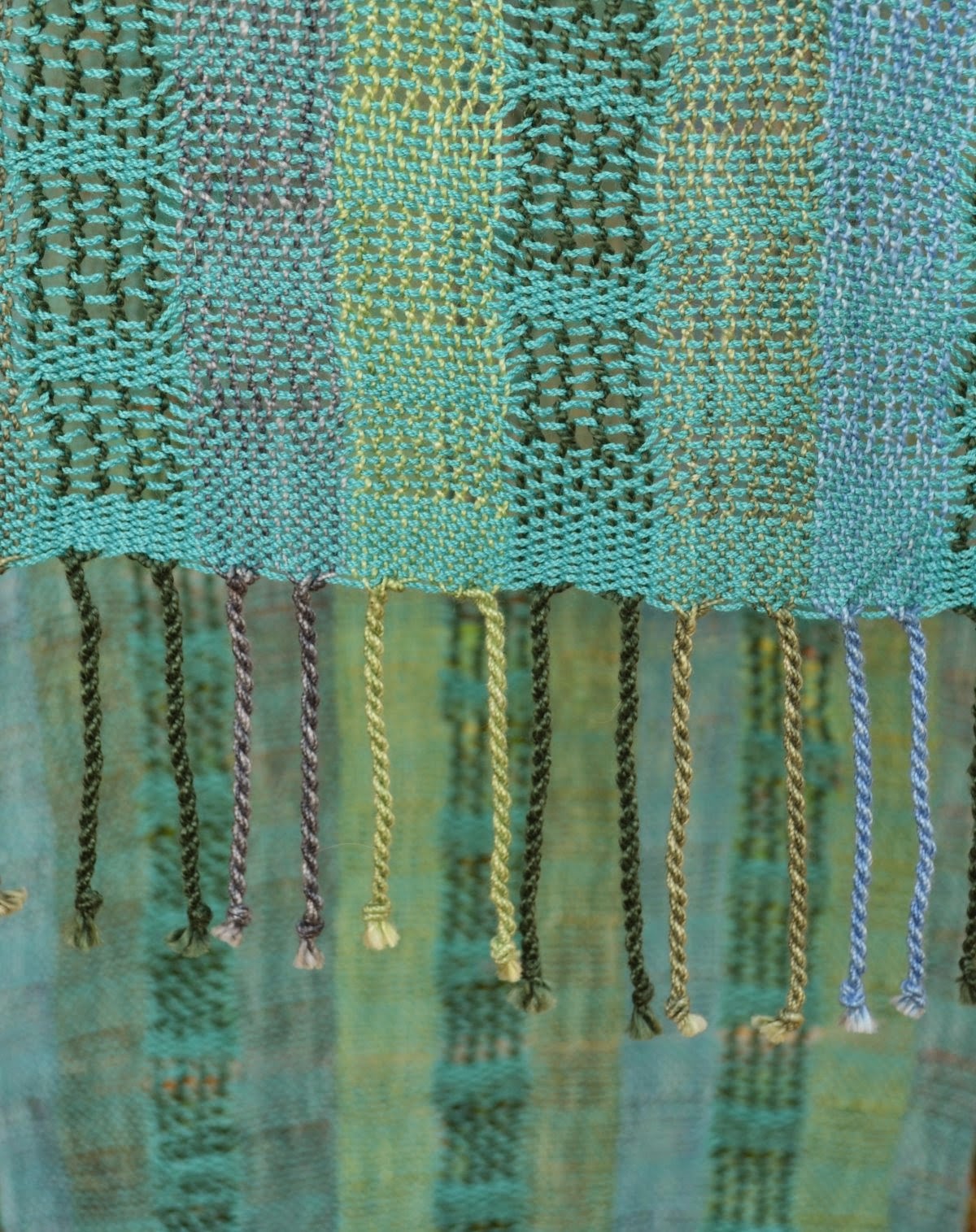 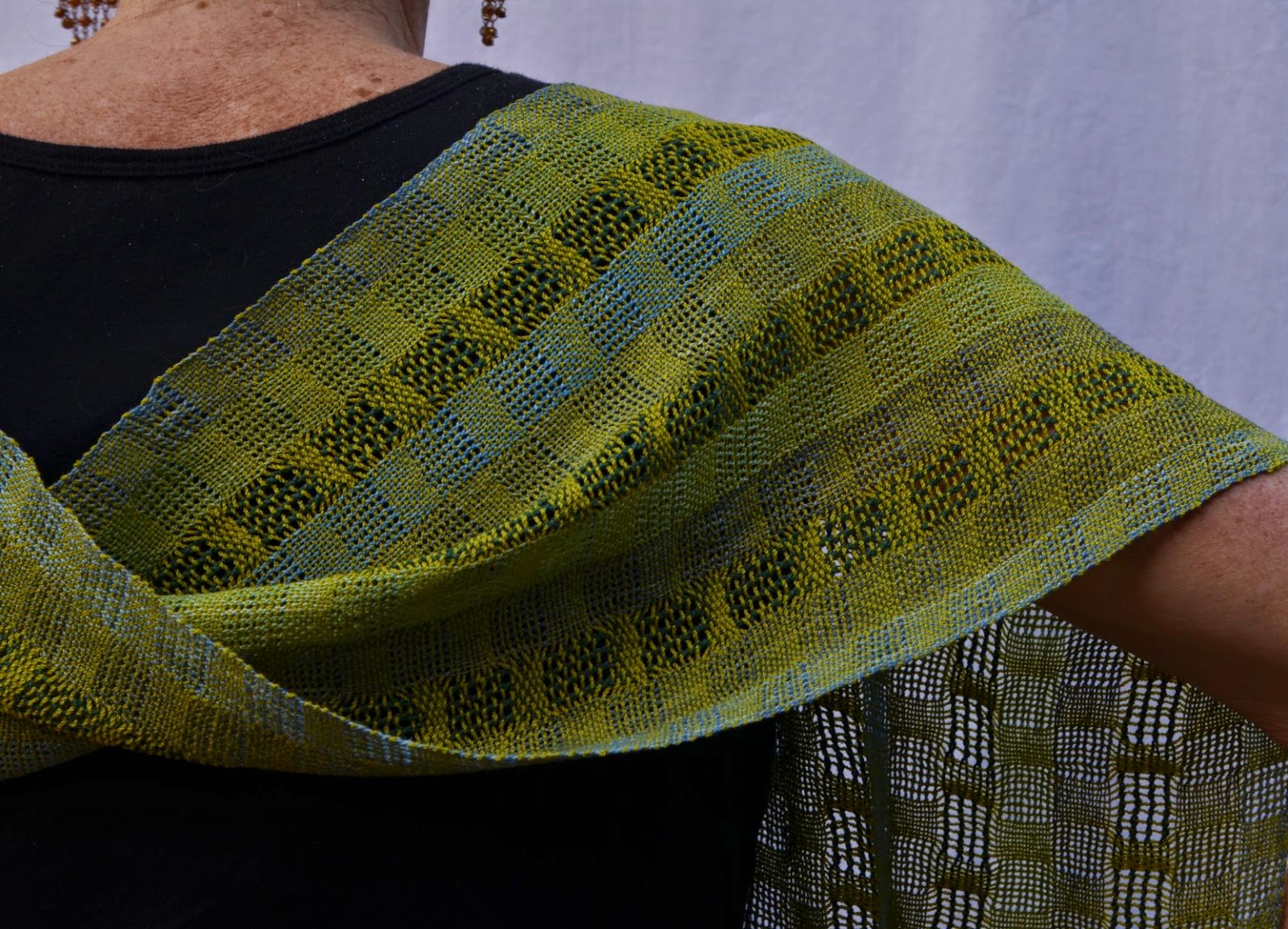 Posted by Deanna Deeds at 4:14 AM No comments: Links to this post 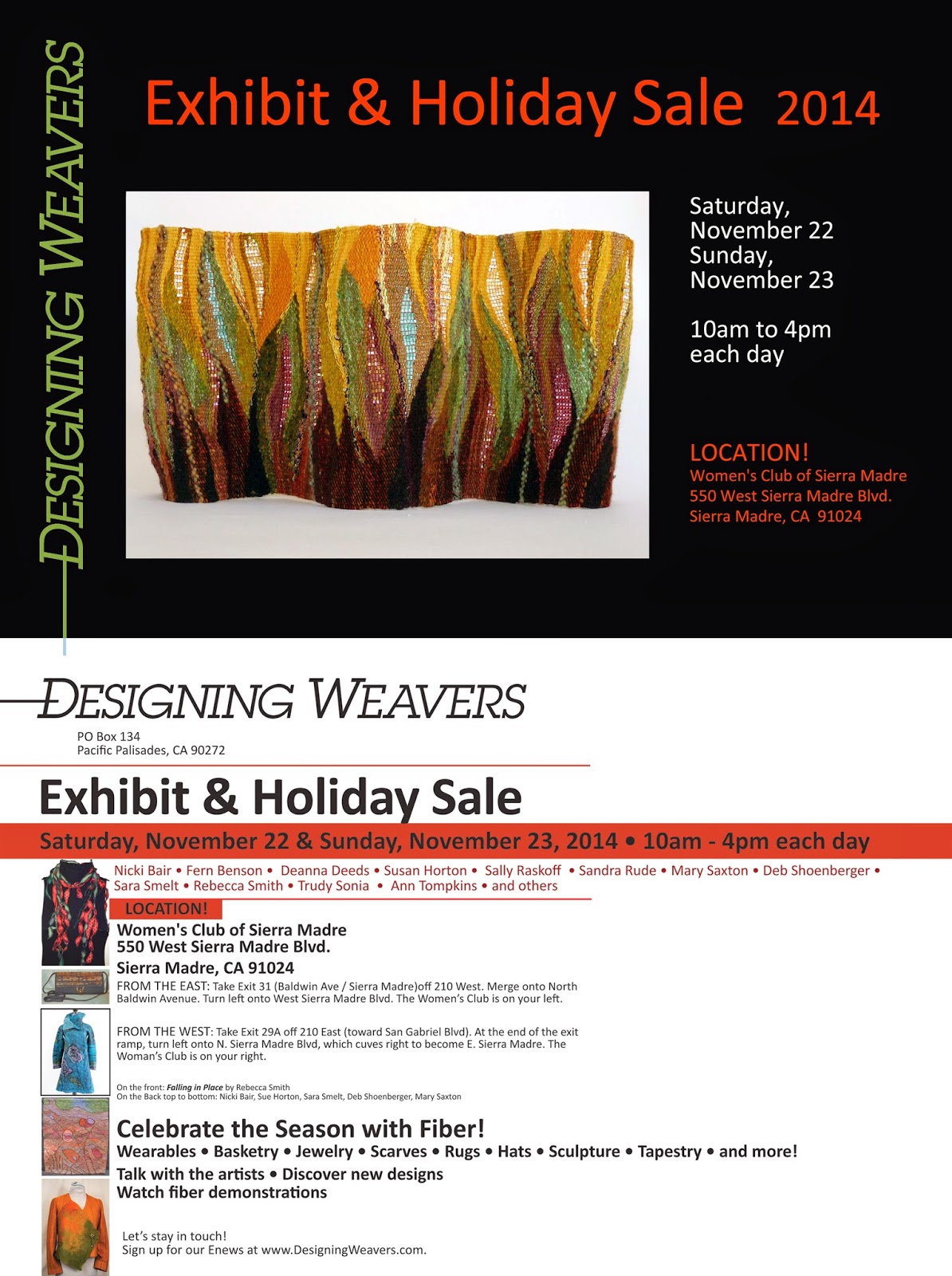 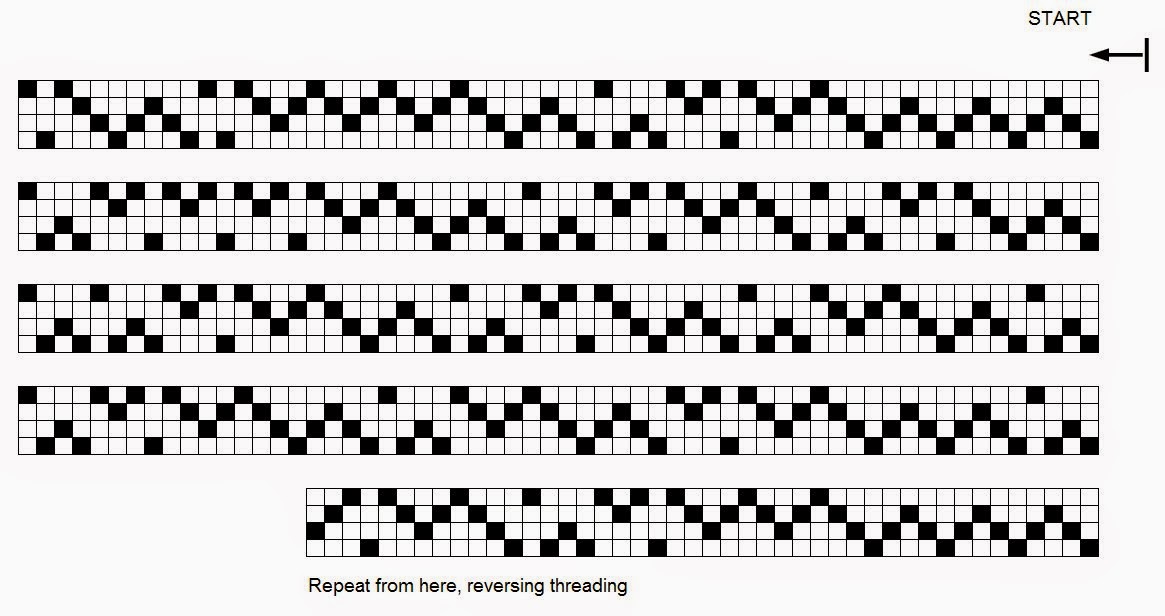 Crackle weave actually comes to us from Sweden, where it is called Jamtlandsväv.  The term "crackle" was coined by Mary Atwater in the 1920s and 30s when she introduced it to her Shuttle-Craft Guild.  The threading sequences for crackle weave patterns can be very long with no repeats, so be prepared for this if you want to make this towel.

The treadling is shown in this screenshot from the weaving software I use (Fiberworks PCW).  The patterned area is woven "using tabby", that is weave a pattern pick with the pattern colored yarn, then a plain weave pick, then another pattern pick, then the alternate tabby.  Note that the center portion is not exactly symmetrical.
Posted by Deanna Deeds at 10:49 AM No comments: Links to this post