It was Christmas for my weaver's feet 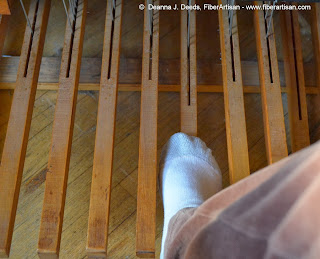 Weaving in winter, even wearing socks, my feet can get a little chilly. Besides that, the treadles can start feeling a bit hard on the soles of my feet on longer treadling sessions. 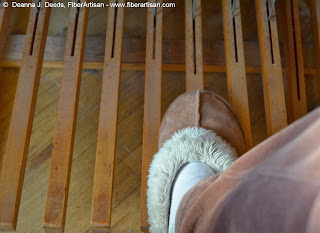 Wearing my warm fuzzy slippers or regular shoes won't work; they don't fit between treadles and I'll push down more than one. 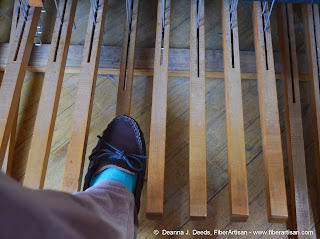 So look what my Secret Santa sent me this year!  These are driving moccasins.  They are narrow and have some traction bumps added on the sole.  They help keep my feet warm and protect them from the hard treadles.  I woudn't walk any distance in these, but I can pad around in the house between weaving sessions.  I think probably any mocs would work great; they wouldn't have to be the sort meant for driving.
Posted by Deanna Deeds at 7:51 AM 2 comments: Links to this post

"Cranks live by theory, not by pure desire. They want votes, peace, nuts, liberty, and spinning-looms not because they love these things, as a child loves jam, but because they think they ought to have them. That is one element which makes the crank."


eccentricity:
1. an oddity or peculiarity, as of conduct deviating from the recognized or customary character
2. a measure of the noncircularity of an elliptical orbit, the distance between the foci divided by the length of the major axis


I've been thinking about eccentricity as in #1 above lately, finding myself putting aside tasks on my should-do list to eke out time to repeat more and more versions of my weave/sprang structures.  I like the quote about cranks (eccentric people) from Rose Macaulay, not just for the sentiment but because it has the words "spinning" and "looms" in it.  I'm not quite sure what a spinning-loom is, but I'm sure I ought to have one. 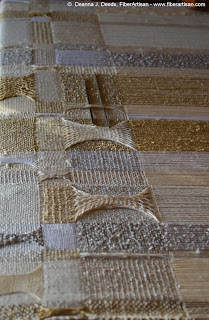 Since eccentricity means also the non-round-ness of a curve as in #2, the term also fits this project.  Most of my fabrics so far have featured sprang areas each of whose width equals its height, the sprang therefore fitting within a square.  I've been wanting for some time now to experiment with sprang motifs where the aspect ratio of the height to width varies within a project, yielding various rectangles instead of just squares... so the shape of the curve formed by the edge of the sprang also varies.  This piece, in doubleweave/sprang, explores the resulting different eccentricites, as well as the effect of different sizes, textures and spacing of yarn.  I think my choice of varying textures in the light neutral scheme was influenced by Rosalie's scarf that she did in all-white with the different textures.


The photo shows the breadth of variation: from the skinniest 4-thread braid (in the foreground) to a sprang section wider than its height (in the background).  The warp is composed of various odds and ends from my yarn stash, all in neutral whites, off-whites, beige and silvery gray.  It has wool, rayon, cotton, silk and various blends.  It has sett (ends of warp per inch) varying from 12 to 32.  Surprisingly, it was fairly well-behaved to weave; I thought I'd have a lot of trouble with sticky sheds and varying take-up, but it was forgiving enough to get through well over a yard of weaving, a length long enough for me to be satisfied that I had explored the concept enough to call the piece done.
Posted by Deanna Deeds at 6:09 PM 10 comments: Links to this post 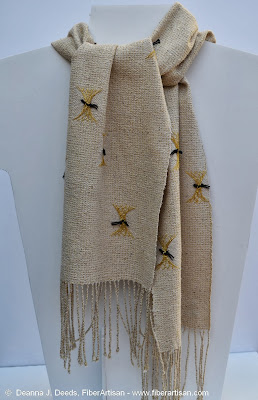 The Designing Weavers show and sale was loads of fun.  There were so many beautiful garments for sale, and I had a good time modeling various pieces throughout both days.

I sold a couple of my "flutter-by" scarves, but I still have some left, so I've put them up for sale in my Etsy shop - go check them out!

I do have a new project on the loom; I've returned to the doubleweave plus sprang construct... but that will have to wait until the next post.
Posted by Deanna Deeds at 12:50 PM No comments: Links to this post