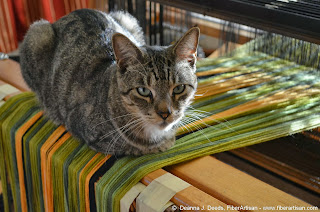 Got the latest project onto the loom.  I just had to start with a photo of my little helper.  No, he is not helping tension the warp.  He is being naughty and I think he knows it.  But I just had to shoot a picture before shooing him off.  Kitties lo-o-o-ove wool. 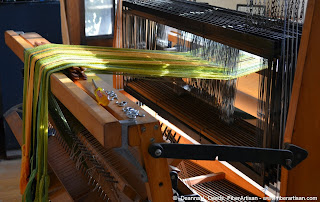 It seems that with each warp, there's always something.  With this one, I was so excited to get it onto the loom that I forgot to run the beamed (cotton) portion of the warp through the slot between the two warp beams, so that the weighted (wool) portion wouldn't sit on top of it.  Here I have some stick shuttles sitting between the two layers.  You can see the cotton warp coming up from the warp beam and going outside that additional back beam.  It's supposed to go between the two back beams in that slot, where the handle of the screwdriver is. 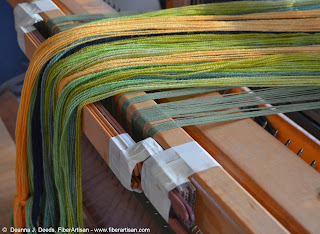 I thought I would be clever and just slide that beam out from under the cotton warp, and replace it between the cotton and the wool layers.  Alas, I could only get 3 of the 4 screws to budge.  (The loom is older than me, after all.)

So I ended up constructing an ugly and only partially effective separator from stick shuttles and masking tape.  Yes, masking tape makes many appearances in my weaving path.  Useful stuff. 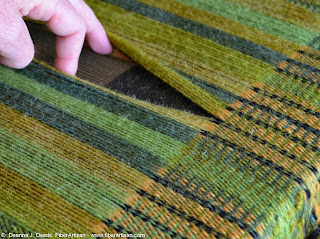 And it seems to have worked well enough for it to weave, anyway.  Here's the work-in-progress shot.  I have woven a 3/1 twill using both the cotton and wool warp for a few inches, and now I am weaving just the cotton in a back layer of plain weave, leaving the wool warp unwoven to be worked in sprang, or double sprang to be exact.  There is a border of 3/1 twill on each side to frame it as well.
Posted by Deanna Deeds at 3:25 PM 2 comments:

I'm dyeing to start my next project 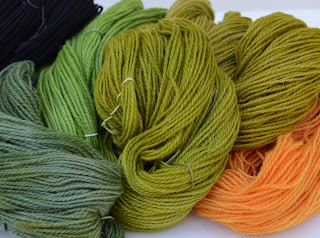 I did some more dyeing.  This time with wool.  I enjoy dyeing wool and silk because as long as you measure the dye for the fiber weight, the dyebath exhausts completely, or nearly completely, which makes rinsing a piece of cake.

This as opposed to dyeing cotton with fiber-reactive dyes, which also happens to bond with water, or maybe it's with the washing soda in the water... anyway, with me it's always a question of which will happen first:: will I get all the dye rinsed out of cotton, or will I get bored with all the rinsing.  But with this wool, it all rinsed out in 3 or 4 rinses, and a couple more for the black which had extra dye to make sure I got maximum depth of shade (DOS).

These are not skeins but rather some warp that I pre-measured.  I wanted several different colors but I didn't want to process them each one at a time, so I made the dyebath in several mason jars, and put the jars into a simmering bath to heat them.  Because the yarn was packed fairly densely in the jars, it did not have enough room for the dye to take evenly.  This splotchiness is especially evident with the green in the lower left of the photo.  If even dyeing was a requirement for this project, I wouldn't have done this, but the greens are supposed to represent foliage, so I'm okay with the result.

Oh, and for anyone keeping score, yes, the post title is a pun.
Posted by Deanna Deeds at 6:07 PM No comments: 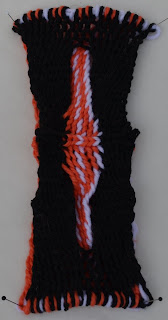 All I can say is that this is not for the faint of heart.

This is my first trial at double-layered sprang.  It starts out with the black layer in ftont, and the lighter striped warp forming a layer in back, hidden by the black layer.
Keeping track of two layers was a new experience.  I tried using Peter Collingwood's method, and part of the way through switched to the method he describes as that used by E. Siewertsz van Reesema, which is to flip the work over and work the back row separately from the front.
Normally when working double sprang, you use these two layers, usually in contrasting colors, to form patterns of light vs. dark areas.  But I'm not really interested at this point in time in making patterns in flat fabric.  So I diverted from the normal method, and instead formed a slit in my front layer, and two slits in the back layer, so that I could bring a portion of the back warp through the slit to become part of the front layer. 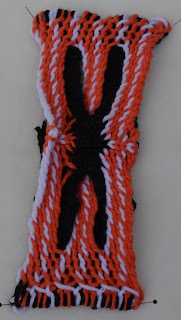 This is the back side of the sample.  Part of the black front layer comes through the two slits to become part of the back layer.

At the top and bottom of the sample, see how the front and back are completely separate layers. 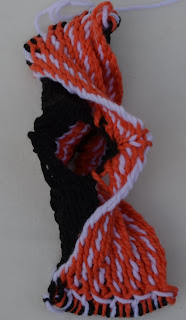 I'm hoping to use this interchange of layers in a sprang and woven piece, to have the portions of sprang twist around each other.  But I will have to figure out a method of working without flipping the piece over, since there will be a layer of weaving behind the sprang as well.

Thanks for reading!  How about you?  Have you worked in double sprang?  What was your experience?

Posted by Deanna Deeds at 3:53 PM No comments:

﻿ ﻿
Rosalie has finished her piece combining weaving with sprang.  It's a scarf she wove as a gift.  She used lots of different textured yarns in the weft, in addition to the sprang.  Isn't it lovely!

Here's a little more about the scarf and the process from Rosalie, included here with her permission:

How do you feel about it now that it's finished?  I'm really glad I'm done.  It was a slow go with up to 4 shuttles in a row.  Did it on the knitters loom.  And having to weight all the threads off the back of the loom was hard.  I retied the back every time I started a new sprang element cause those threads needed less tension and the position of the elements changed every time.

Did you enjoy the process?  Sometimes.  Using the crochet hook for the 2 rows was a pain in the %$& and took forever.

Do you feel that you got better at it with practice?   Yes, each one is different on purpose... I knew I'd never be able to have them all be uniform.  I had to start over several times for the first few, but didn't need to towards the end.

Would you do it again, or has it led to other things you'd like to try?  I will NEVER do this again.

...and there you have it!  Oh, well, I was hoping I'd have some company in this adventure, but I guess not.  That's okay﻿, I'm still pressing on with my own developments in combining weaving with sprang.

How about you?  Is there anyone out there who has combined weaving with sprang before?  Please leave comments below.  Thanks!

Posted by Deanna Deeds at 3:05 PM No comments:

Hmmm... maybe the reason I never found a published version of this sprang-and-woven dress after that 1979 Weaver's Journal article is that someone did try it and decided it didn't work so well.  I didn't exactly "fish what I wished" this time. It's not as I had envisioned it. The sprang part did not collapse as much as I'd hoped. So I have more of a bloused effect at the waist instead of fitted. Still, I think it's not unattractive and I'm pleased to have a new dress.

The colors in the warp, alternating between light and dark values, give the woven part of the fabric an almost iridescent character. 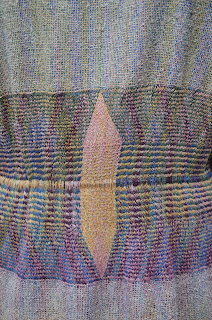 Here's a detail of the sprang part at the waist.  I made a drawstring cord and put that through the last interlinked row of the sprang.

What do you think?  Have you had a project not turn out the way it looked in your head?
Posted by Deanna Deeds at 12:48 PM 4 comments: