My two pieces got home last week from Colorado, where they had been hanging in the Loveland Museum Gallery for the Northern Colorado Weavers Guild's Fiber Celebration 2013.  The hanging rod for the panel got bent and the mailing tube looks like it opened like a can of Pillsbury biscuits, but the fabric panel itself seems to have survived OK. 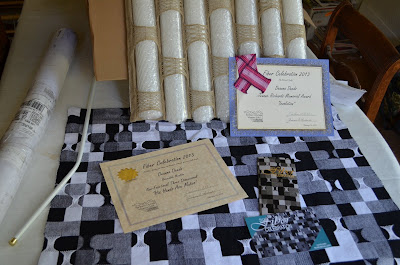 Involution won the Jeanne Richards Memorial Award, and His Hands are Mutes got honorable mention in its category.  I wonder if the rod got bent on the way to the museum, and they hung it that way, and that's how it got into the "Non-Functional Three Dimensional" category?  Hmmm, I was sure I entered it in the two-dimensional one...

And look, someone must have liked His Hands are Mutes so much, they used it as the background on the postcard and the exhibit catalog! 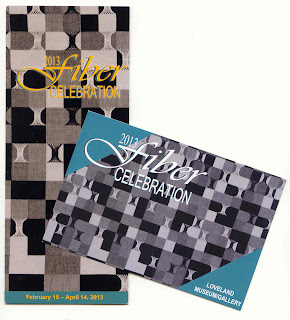 Posted by Deanna Deeds at 3:12 PM No comments:

This month I made presentations to two local guilds, Southern California Handweavers' Guild and South Coast Weavers and Spinners Guild.  In my talks I introduced Sprang (braiding of fixed-end warps), went over a bit of its history, showed examples of four current fiber artists working in sprang (Carol James, Graciela Foradori, Edith Meusnier and Chieko Aihara), and then went through the development of my work incorporating sprang into my harness-loom-weaving (basically covering a lot of what I've been blogging here).

At SCHG, I also led a 1-1/2 day workshop.  What fun that was!  Everyone seemed to (eventually) get the hang of the 1/1 interlinking, and some participants then ventured to try some other "stitches", or other colors, weights and fiber content of warps.

Here's one with thick and thin yarns in an A-A-B repeat, and simultaneously learning how to intentionally create a hole in the work: 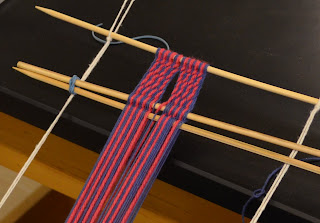 This is using double-twist interlinking with a striped warp to form diamonds: 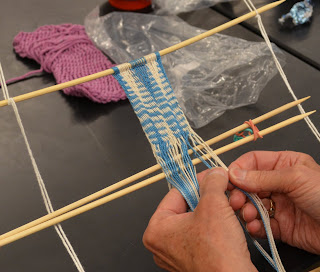 This fiber is linen in 2 slightly different weights, interlinking changing to interlacing.  Look how much energy the interlinking area has!  I couldn't make it lie flat: 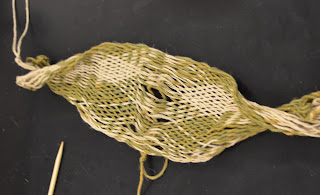 A gorgeously-colored striped warp with interlacement: 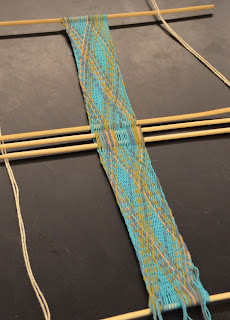 And some particpants tried out the Torchon Lace stitch: 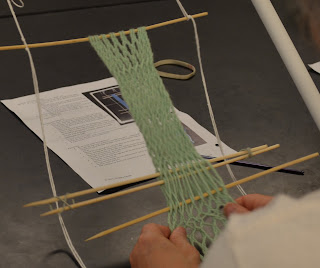 I'm so proud of each student in the class.  And I hope everyone had as good a time as I did.
Posted by Deanna Deeds at 3:04 PM No comments:

The scale was just too small on the woven experiment #2.  I wanted the colors in my background to have more life.  So for the big piece(s), I went to 20/2 wool, and painted it with acid dyes.  I did two images to get two paintings with the same wastage as one, plus I thought I might need some practice and hopefully one of the finished pieces would come out as I hoped.  Here is warp #1: 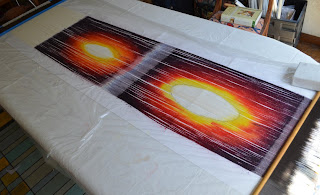 Then it bled a bit.  Well, OK, a lot.  One of the paintings less so than the other.  Here is the same warp a little while later: 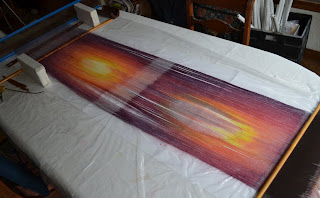 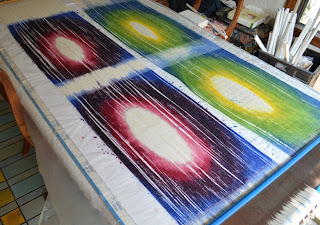 And the first piece, after weaving in twill weave, with sprang "tree" forms in the foreground silhouetted against the painted-warp sky.  In this one, you can see clearly the warp I used for the sprang coming out of and reentering the fabric above the branches and below the roots: 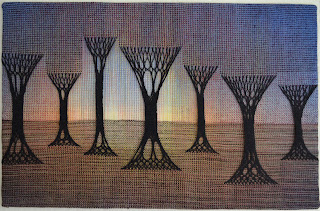 It felt really good to weave on this painted warp.  I just had all this color in front of me.  It's funny but it seems like whenever I try do do something in color, it always turns out purple-and-green-and-orange (is it that I don't like the primaries, or that I just like mixing things?).  These warps had just about all the colors in the rainbow, but when I raised each shed to weave, I called them in my head the purple warp, the green warp and the orange warp.

Here's the second image.  I think I got the hang of the "tree" forms better on this one.  The sky is also more vibrant (it's the one that bled less): 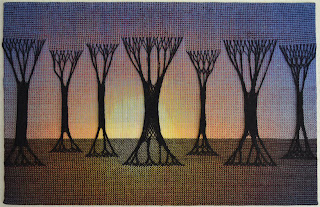 Experiment #2 in warp painting for luminosity

Next I tried mixing painted warps again, like in the paper experiment except with smaller "pixels" using yarn, a 10/2 cotton. I divided the warp into three different sheds and painted a similar globe of light on each, again using different colorways grading from light to dark values going toward the edges. 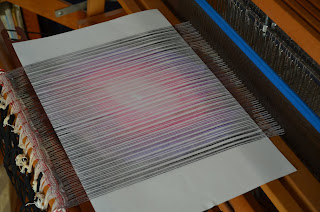 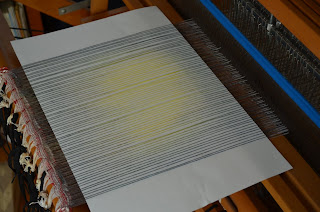 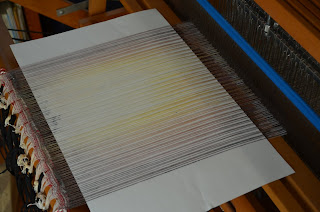 I did a few like this in plain weave: 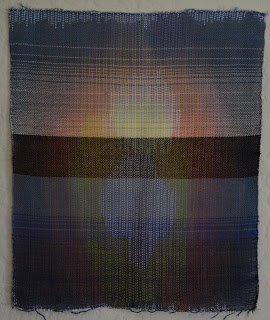 And then re-sleyed the reed and did one in twill which I think came out more dramatic because I was able to make the bottom part weft-dominant (1/3 twill) and the sky warp-dominant (3/1 twill): 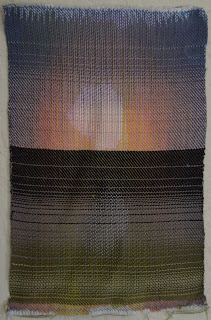 But then I decided I had gone too far in scaling down my pointillist "pixels".  I wanted my main piece to be more weaverly, if that's a word.  To be continued...
Posted by Deanna Deeds at 11:15 AM No comments:

Experiment #1 in warp painting for luminosity

I'm part of a study group on color, and this year we have been focusing on how to achieve effects like luminescence, opalescence and iridescence in fiber. I chose to narrow my efforts toward luminescence or luminosity.

I was impressed by fiber artist Fuyuko Matsubara whose work seemed to have an effect similar to what I was after. She has a very involved process including unweaving and reweaving (!) her work, but thanks to some inspired conversation at thanksgiving (thanks, G!) I tried something simpler and I think it is working.
My first experiment was in watercolor on paper. I made two images of concentric circles going from light to darker values using two different colorways, sliced up the paper and used the strips alternately as "warp".  Here are the two "warp" images (cosmic, huh?): 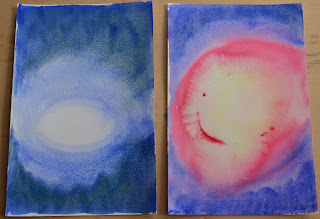 Then I wove "weft" stripes in a land/water-scape composition. Here is the "weft: image: 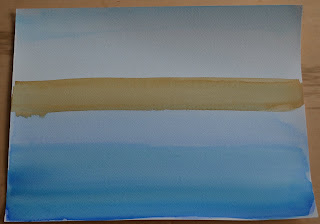 And here is the woven image from the three paintings.  You have to really squint to get sort of a pointillist image to come out. 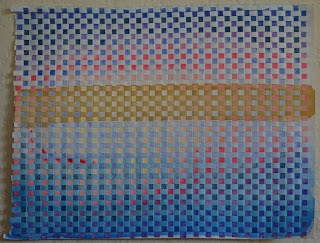 So I decided it was time to try it with yarn, to get smaller "pixels" in my image.
Posted by Deanna Deeds at 2:25 PM No comments:

Last Thanksgiving (yes, this is a very late post), we (I with my helpers G & M) made a sampler based on one of the twill stuctures in my Bliss piece.  By threading the warp ends to be spranged on a different shaft for each block, many blocks are possible so that the sprang can start and stop independently at the weaver's whim.

This sampler leads to another serendipitous convergence of ideas. 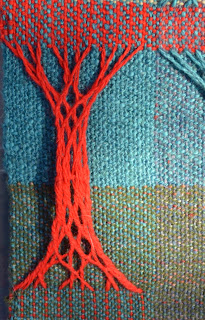 M said that this piece of sprang looked particularly like a tree (ignoring the color I suppose).  I needed a subject for an upcoming project, and I had been thinking of depicting a grating or lattice lit from behind, but I like the tree idea much better.

The sprang in this case is the diamond-shaped all-over hole pattern that is formed by alternating rows of 2/2 interlinking with rows of 1/1 interlinking.  There are less crossings, so it gives the impression of branches.
﻿
Posted by Deanna Deeds at 7:18 AM No comments: