Garment Experiment #1 - and the source 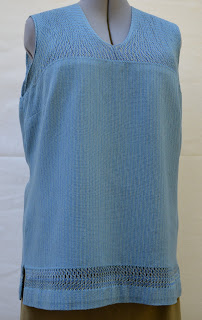 Well, I am still weaving and spranging (is that a word?) the "cartouche" piece, but I realized that I never posted a picture of the finished garment #1.  Here it is, a tunic top with sprang yoke/shoulders, and a sprang decorative hem feature.

It is in 10/2 cotton, plain weave pinstripes.  The hem sprang inset was done while the fabric was still on the floor loom.  The yoke portion uses only every other warp yarn.  The unused warps were woven into a little facing that I pressed back.  The sprang for the yoke had to be done after the piece was taken off the loom. 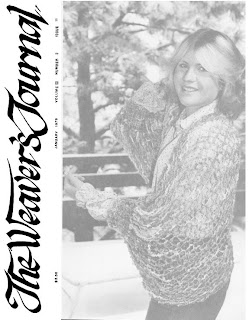 I did not originate the idea for this top, or the current piece I'm working on.  The concept came from an article in the January 1979 issue of The Weaver's Journal.  The cover features a sprang shrug.

This magazine, along with a gold mine of other old weaving-related publications, is available for free download at handweaving.net . 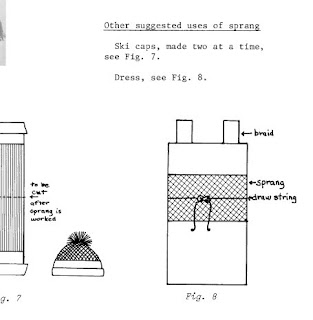 The article is titled "Sprang and Frame Plaiting for Garments", and at the end of the article there are some "other suggested uses of sprang and frame plaiting".  To my knowledge, any implementations of these suggestions were never published.  I think they go well with the other trials I've been doing combining loom-weaving with sprang, so I thought I would try them out.

My top is like the one labeled "dress with plaited shoulders" below.  The plan for my cartouche piece is for it to have a sprang waist like the drawing to the right.

Posted by Deanna Deeds at 5:53 PM No comments: 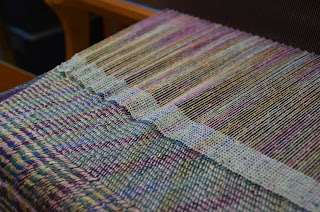 I have finished the sprang part.  As I start the next woven section, this ripple effect is appearing where the draw-in of the sprang is much more than that of the plain weave.  It is only showing up at each edge of the fabric, but I am hoping that when the whole thing comes off the loom and gets wet-finished, it will do this across the entire width of the cloth. 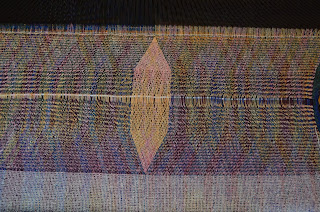 Here is the finished sprang section.  The top and bottom are interlaced sprang, and the middle section is interlinked sprang, completing my "cartouche" shape.

Posted by Deanna Deeds at 3:37 PM No comments: 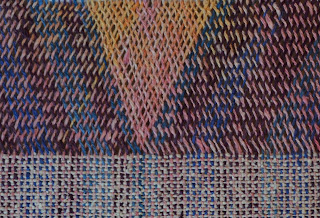 I have woven some of the fabric for this project, and now have started a section of interlaced sprang.  Here is a detail of the transition between the weaving and the sprang.  The point of the pink triangle is at the center of the warp, where I changed from light-dark-light-dark color sequence to dark-light-dark-light.  The light warps on the right half of the fabric are moving to the left in the sprang portion, and those on the left side move to the right, intersecting to form the light-colored triangle. 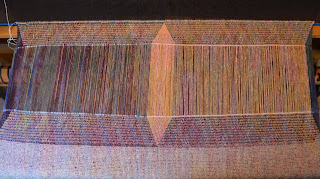 Here's a view of the entire width of the project, showing the upper part of the sprang forming simultaneously with the lower part.  The pink shape in the center is echoed by two dark half-shapes﻿ at left and right selvedges.  (What do you call that shape?  I want to call it a cartouche.)
Posted by Deanna Deeds at 10:59 AM 4 comments:

Experimenting with sprang in a garment - again 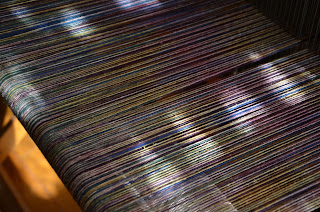 The previous project in plain weave and sprang was a tunic top with sprang forming the shoulders and yoke area of the top.  I am trying a different application now, putting the sprang at the waist of a garment.

The painted (dyed) silk noil shown in last week's post is now threaded on my 8-shaft loom, alternating the light and dark colors.  Here it is at the back of the loom, with afternoon dappled sun coming through the window. 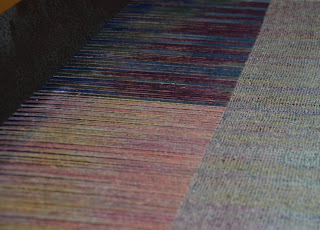 Here it is as I am starting to weave.  I am using a natural-colored silk noil single-ply as the weft.  The warps look totally different from one half of the weaving to the other, because the alternating light-and-dark changes to dark-and-light at the center, so that the top of each plain-weave shed is half dark and half light.  This has no apparent effect in the woven colth, except for a tiny dark stripe at the center where two dark warps lie adjacent.

The effect of the warp order will become apparent when I start the sprang section, which I plan to show in my next post.
Posted by Deanna Deeds at 3:25 PM No comments: