A shot of the finished July towel with its stars and stripes.  There's something nice about the wet-finished, ironed linen, the way it drapes.  It's soft, yet at the same time it has a lot of body and crispness, with a bit of sheen.  It's hard to capture in a static photo.
Posted by Deanna Deeds at 8:28 AM No comments: 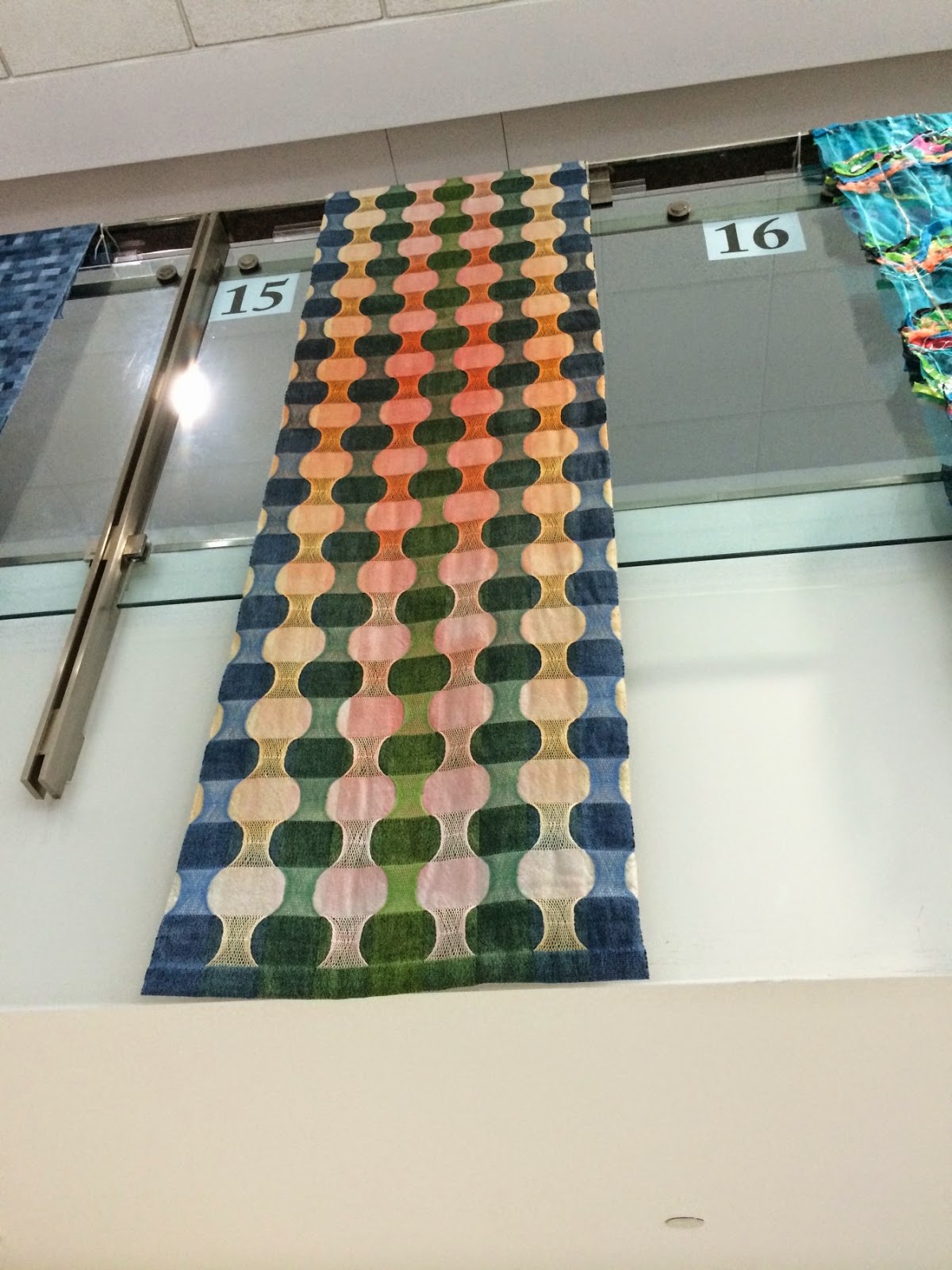 My fabric, "Updraft, Downdraft", was awarded first place in the yardage exhibit at Convergence!  This is an international juried exhibit, so it is very exciting to have my work selected for this honor.  I was so sad to miss out on going there myself, but this is not bad as a consolation prize.

The title of the yardage exhibit this year was "Ebb & Flow", and I wanted to use the curving lines formed by the edges of sprang against a woven background to evoke a repeating surge as an answer to this theme.  The warp was also painted so that the colors graded from lighter to darker values in a second sort of ebb and flow.  There's another repeat of this gradation but you can't see it because they had us fold the fabric and put the casing at seven feet.  The whole piece is about 4 yards long.

This was also my project piece for the color study group that I am in with fellow Southern California Handweavers' Guild members.  This past year our topic was "Adding Black to Color".  I tried adding black to my cool colors to get shades, but since I was dyeing white yarn the result was more like tones.  So I added more black by using a black weft in the weaving.

Thanks to Sally for the photo of the fabric hanging in the exhibit at Convergence.
Posted by Deanna Deeds at 12:41 PM 8 comments:

I got the Rhode Island Blues 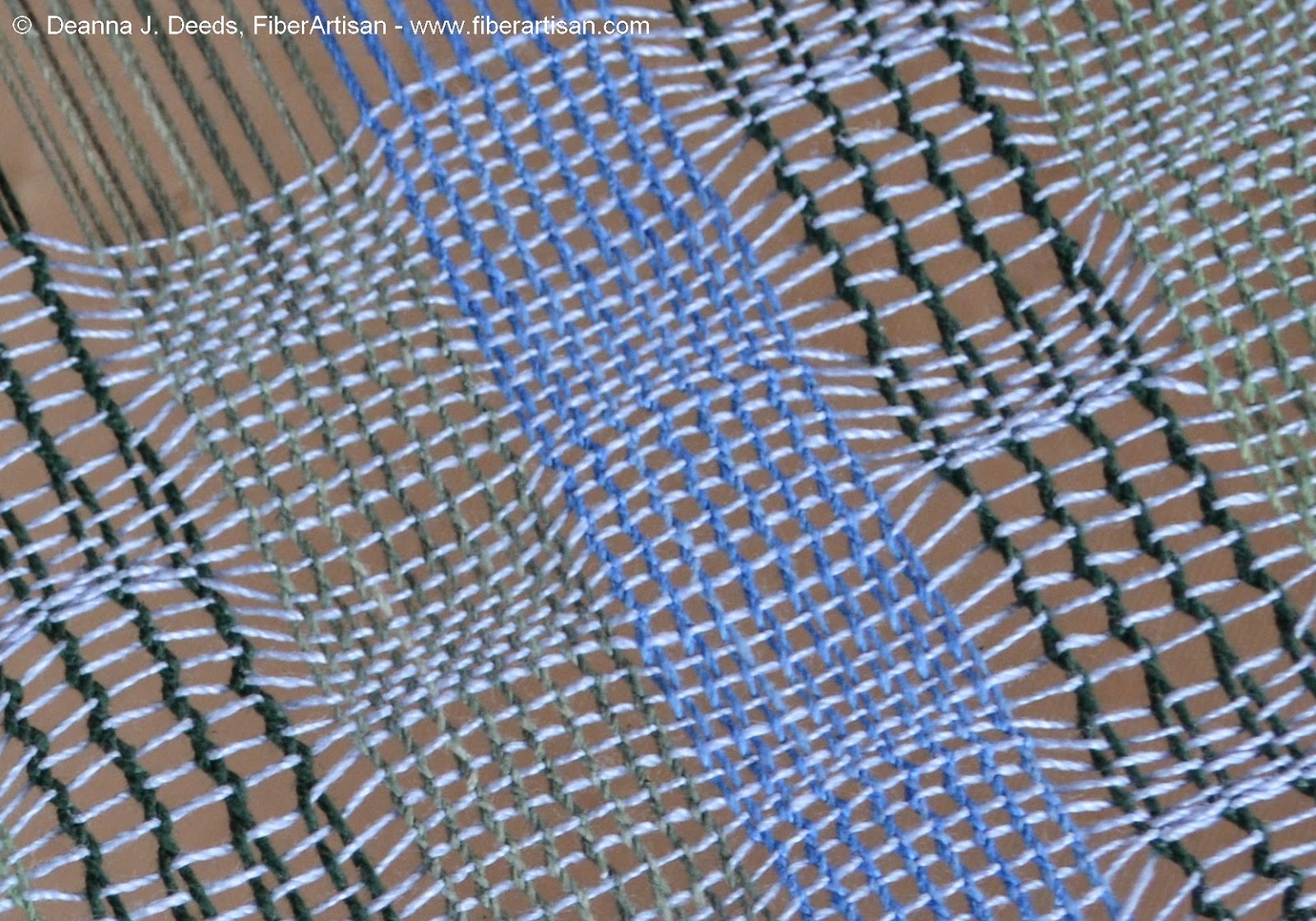 I was supposed to be in Providence today.  But Providence, it seems, had other plans in store for me.  The Polar Vortex cancelled my flight and apparently many others.  It took the airline over an hour just to put a human on the line, and she wasn't able to get me there soon enough to make it worth the trip.  If I would have made it there at all. 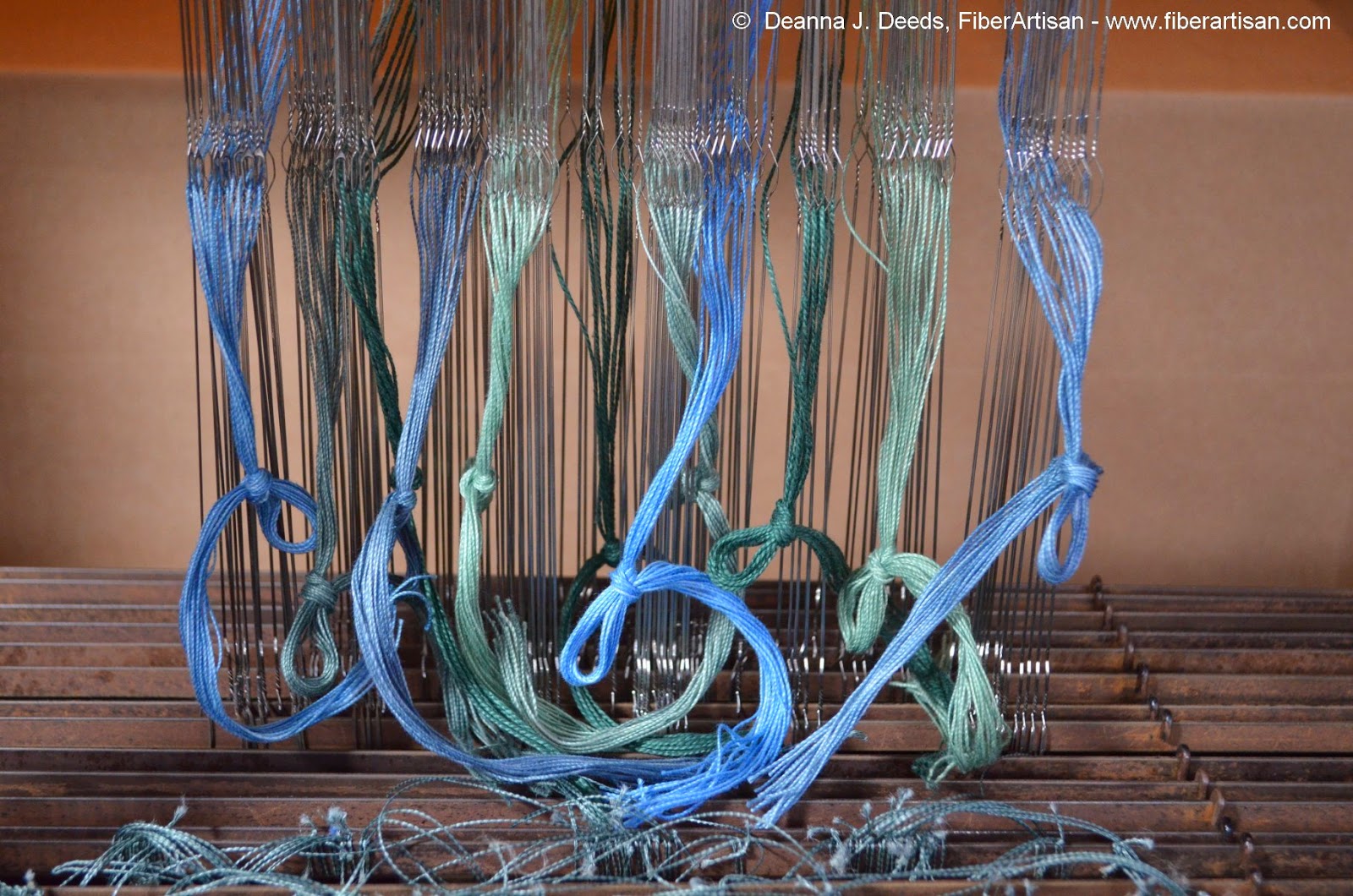 Convergence is something I spend two years anticipating; it was, to put it mildly, a letdown.  I could have gone to work at the Day Job today but felt physically drained and I'd planned to have the day off anyway, so I stayed home - yes, to wallow in self-pity a little, but also to thread a loom. 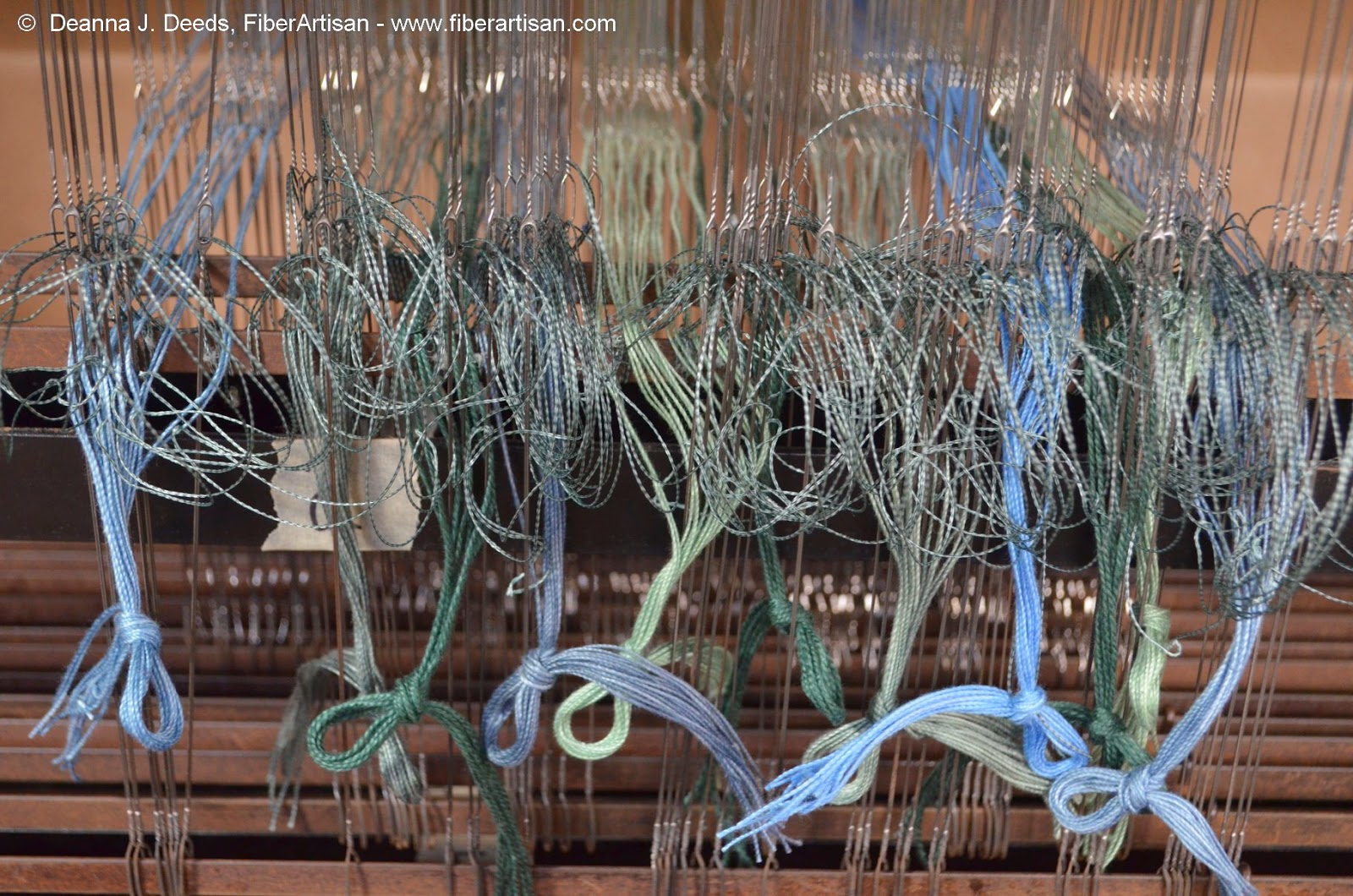 There's some consolation in a sense of accomplishment. 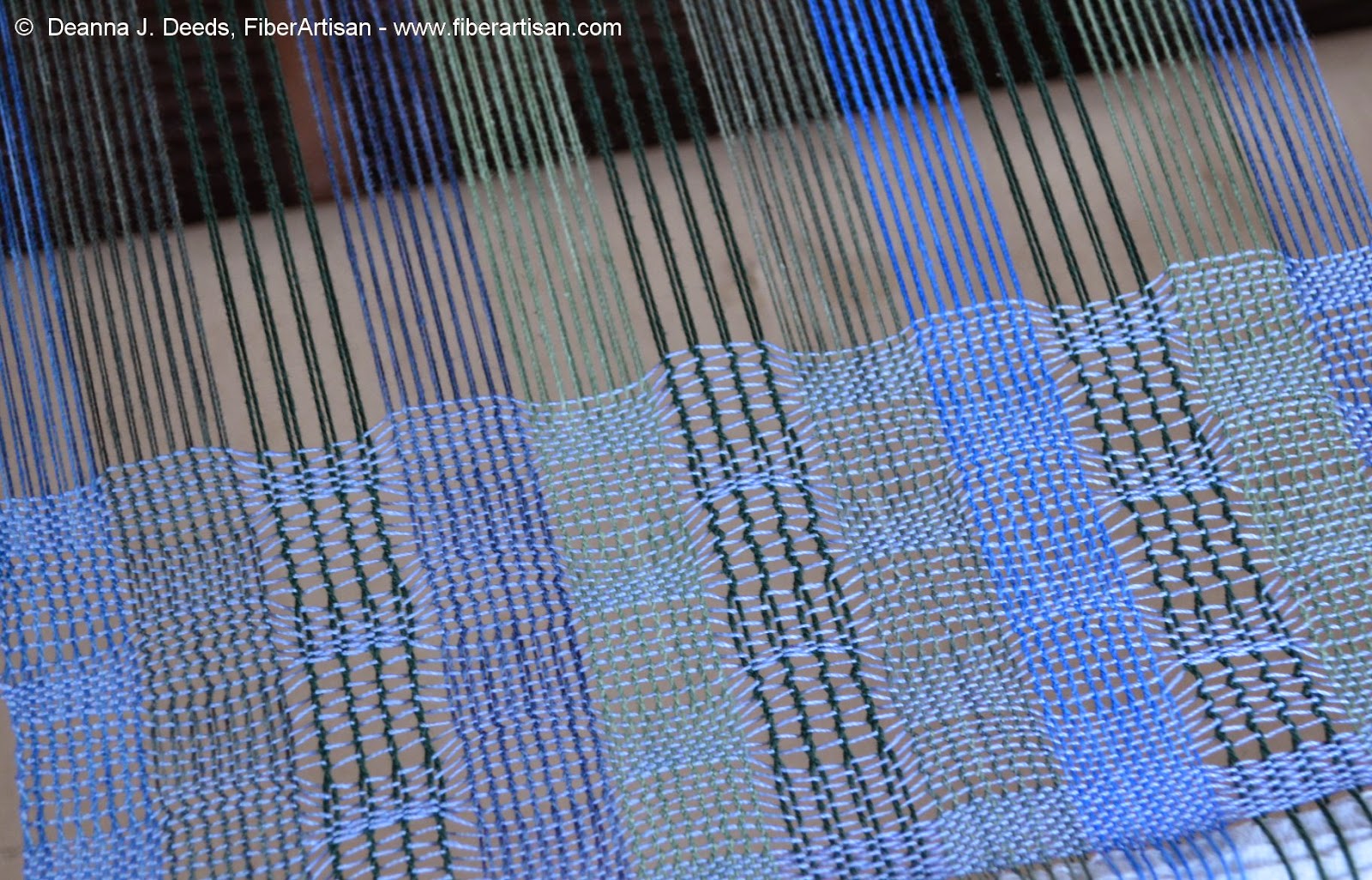 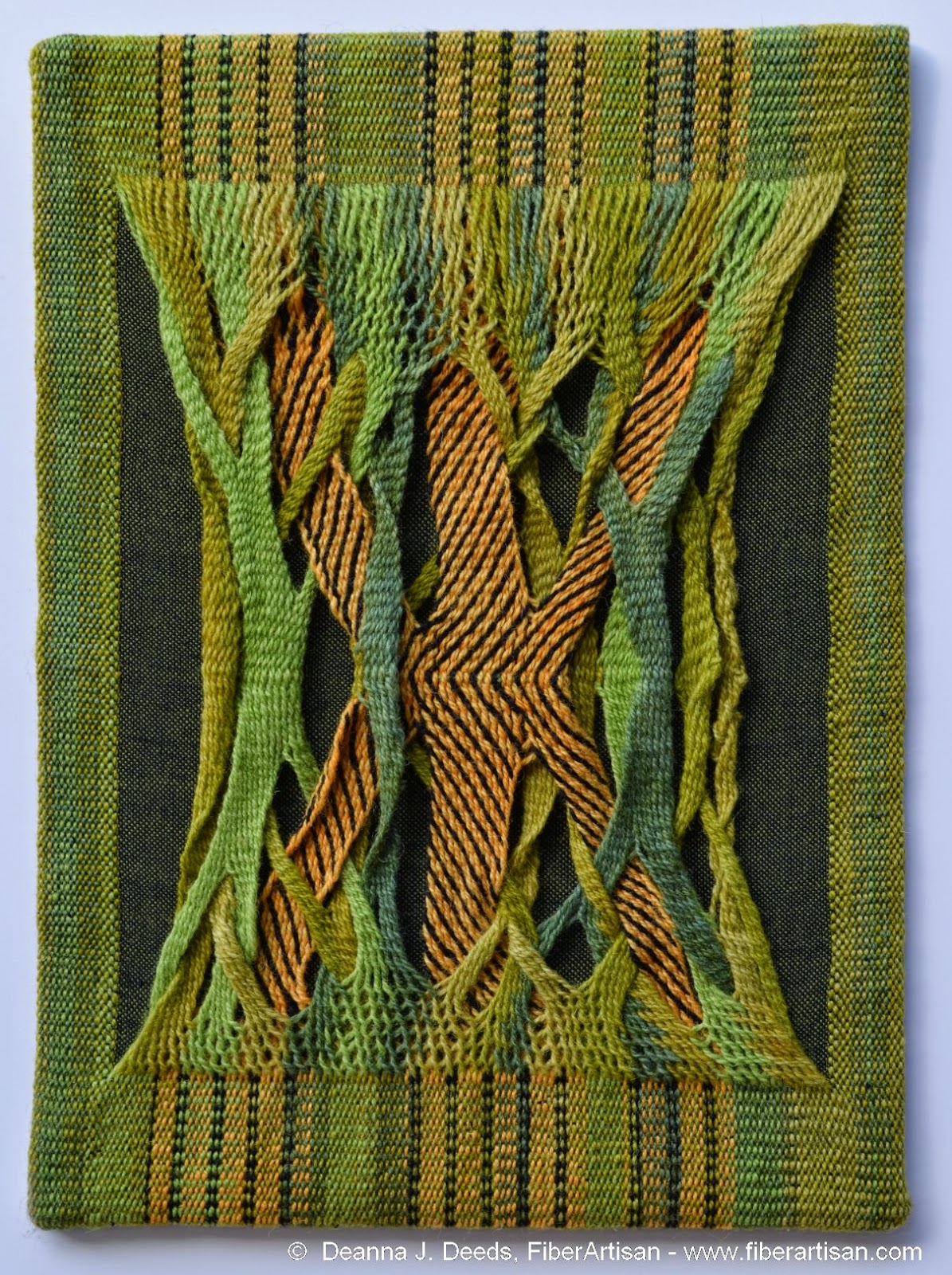 If you're going to Convergence, be sure not to miss this exhibit at nearby Brown University.  See my piece "Predator" and 98 other exquisite woven works.

Complexity
The 2014 Exhibition
An International Juried Exhibition
by Complex Weavers 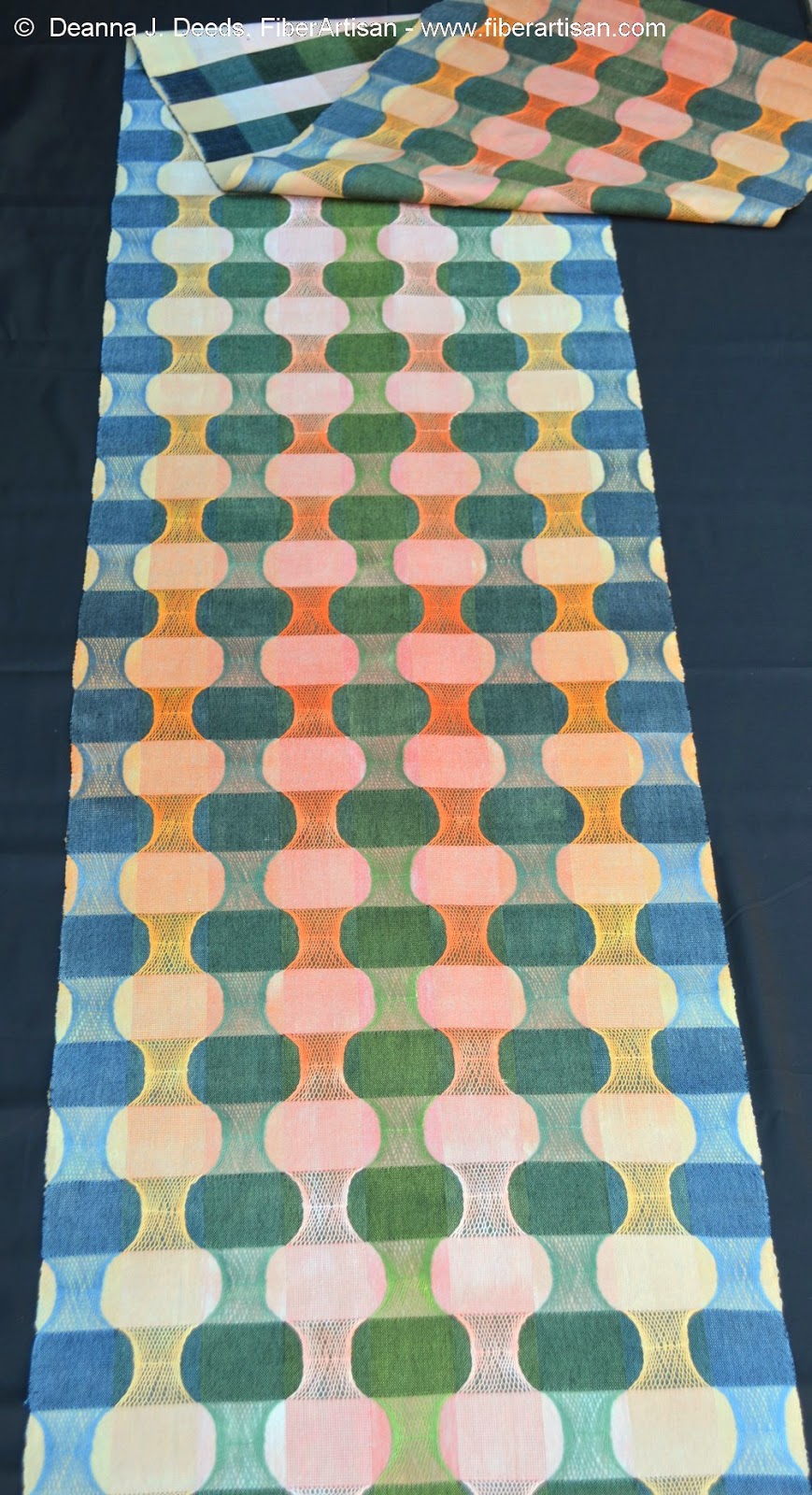 This and other fabulous yardage featured in: 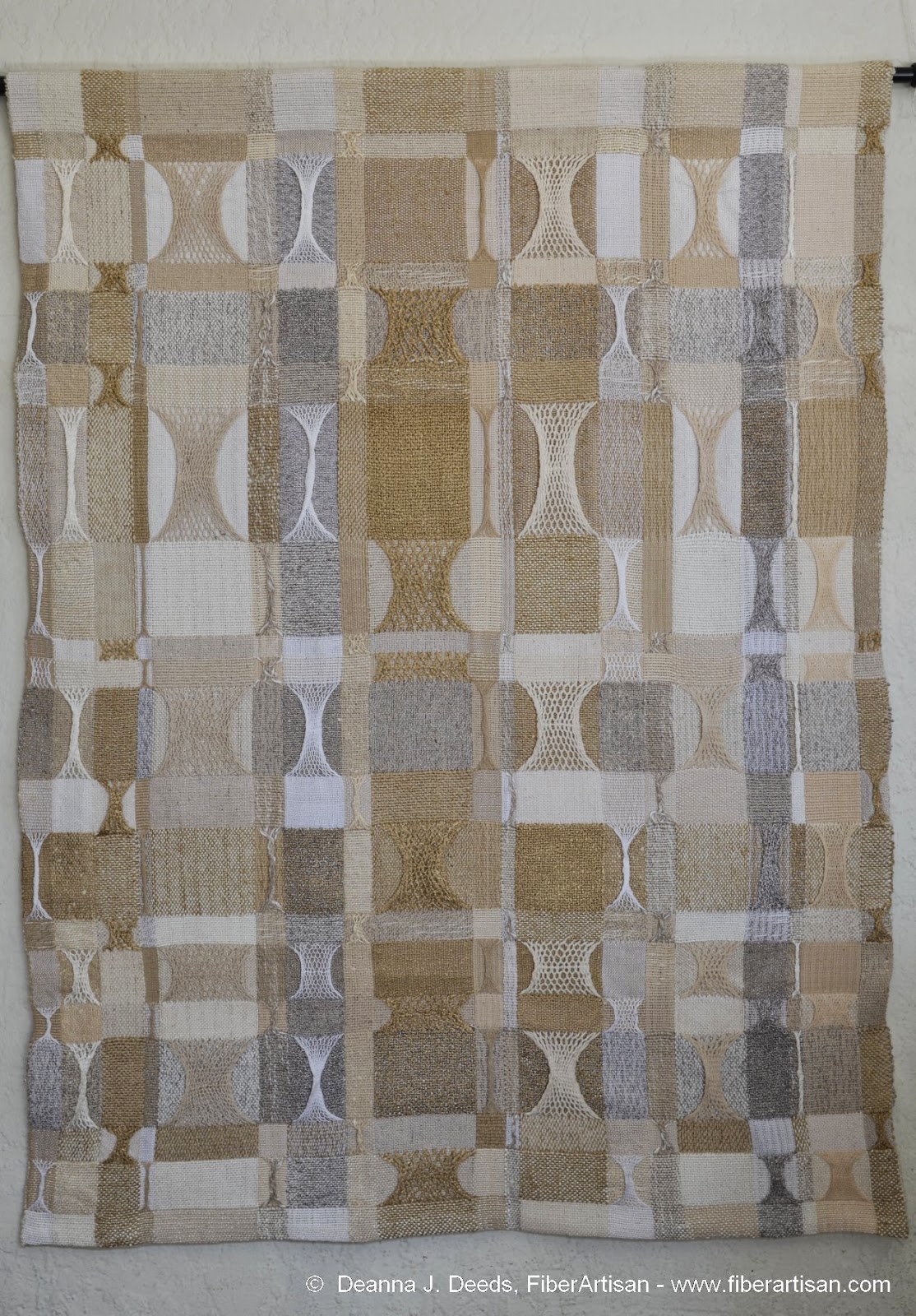 This piece and other fiber arts featured in Providence this month in:

Beam once, thread many 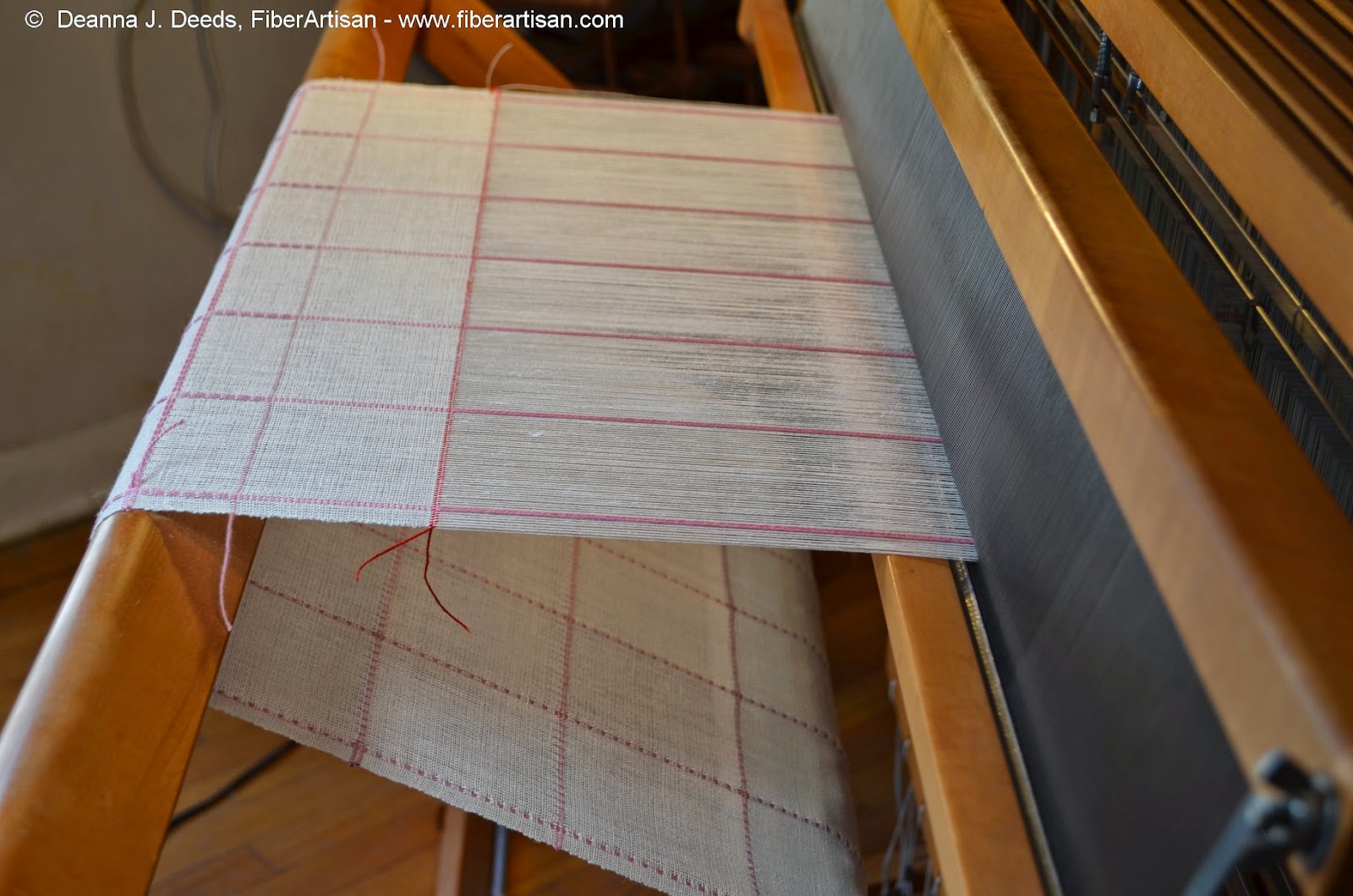 Here's something I'd heard of, but had never tried before.  If you have multiple projects which use the same number of warp ends, but different threadings, you can re-thread between projects, and save the beaming step on the subsequent projects.  I got to the end of this project... 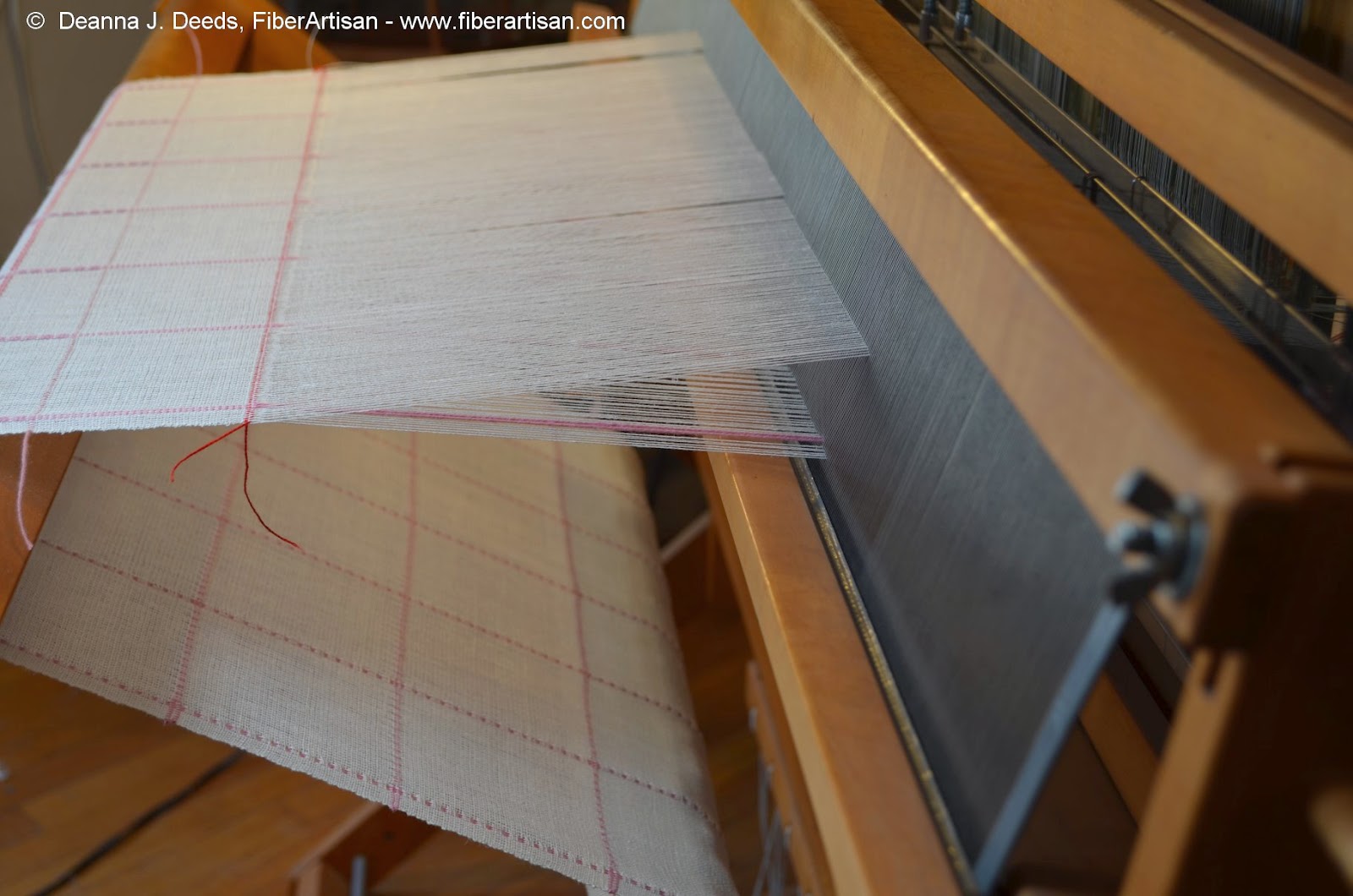 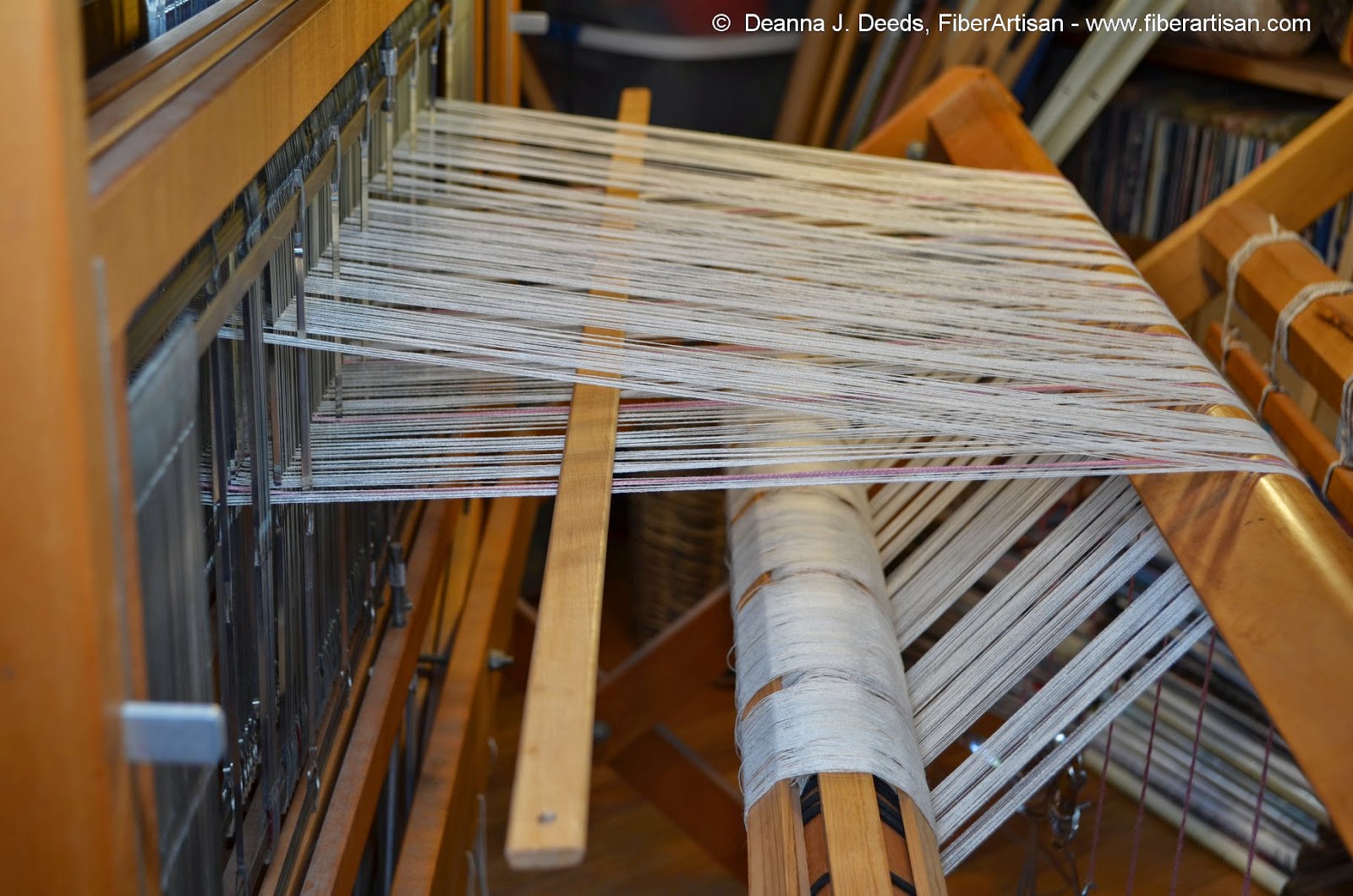 ...then placed a lease stick in this shed behind the castle. Next, open the other tabby shed and place a second lease stick. 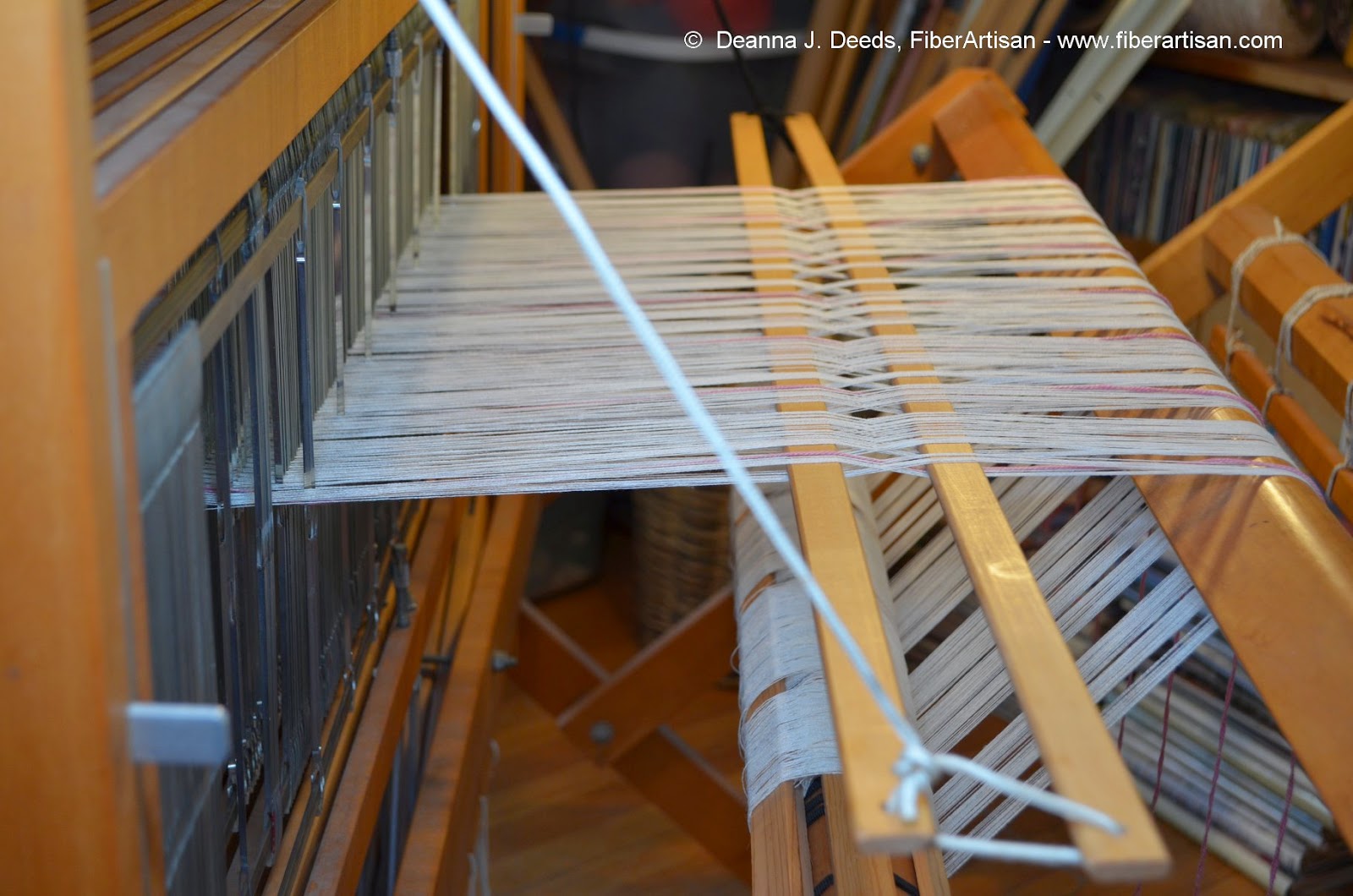 Tie or secure the lease sticks however you normally do for threading. 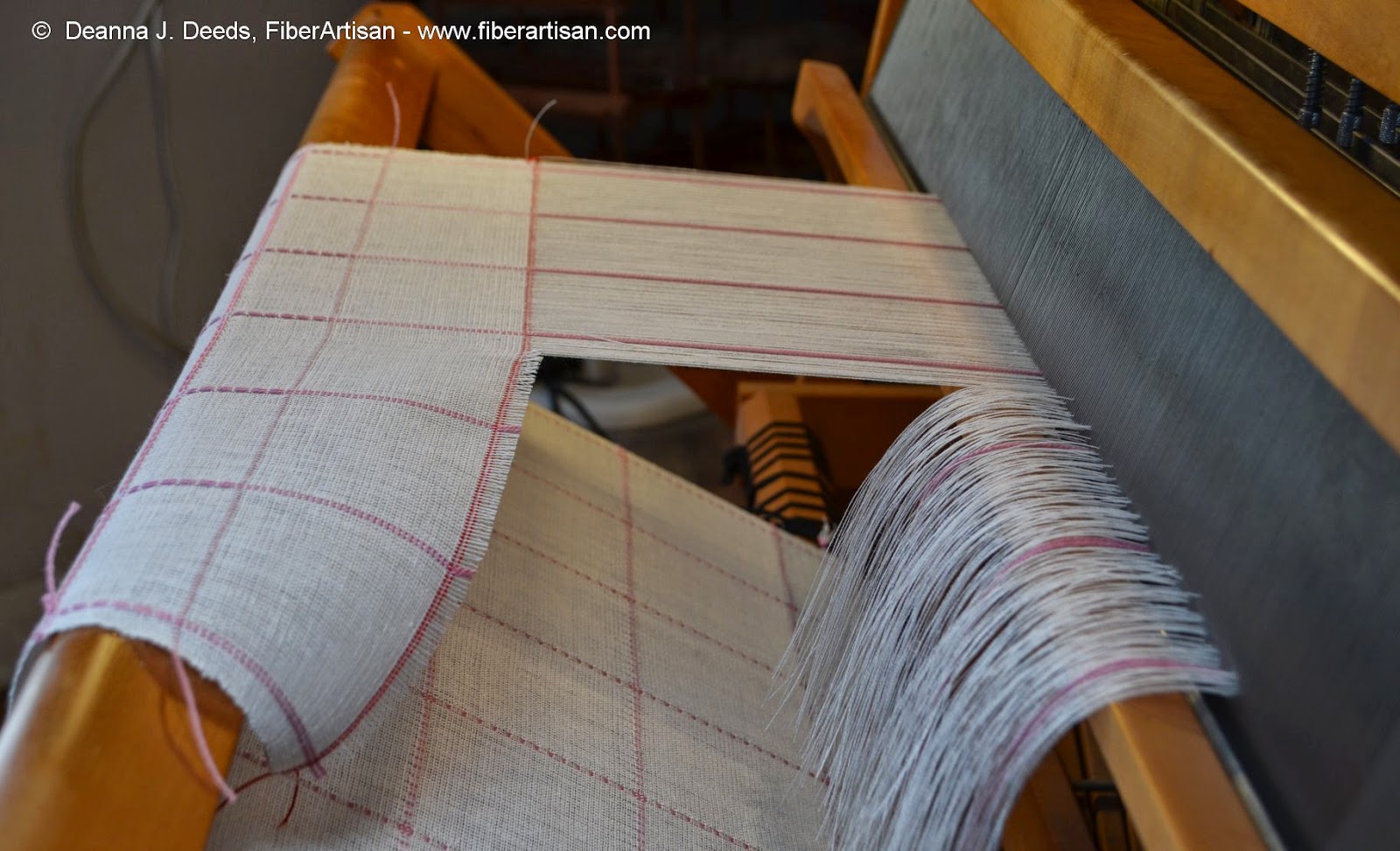 Then just cut off the first project... 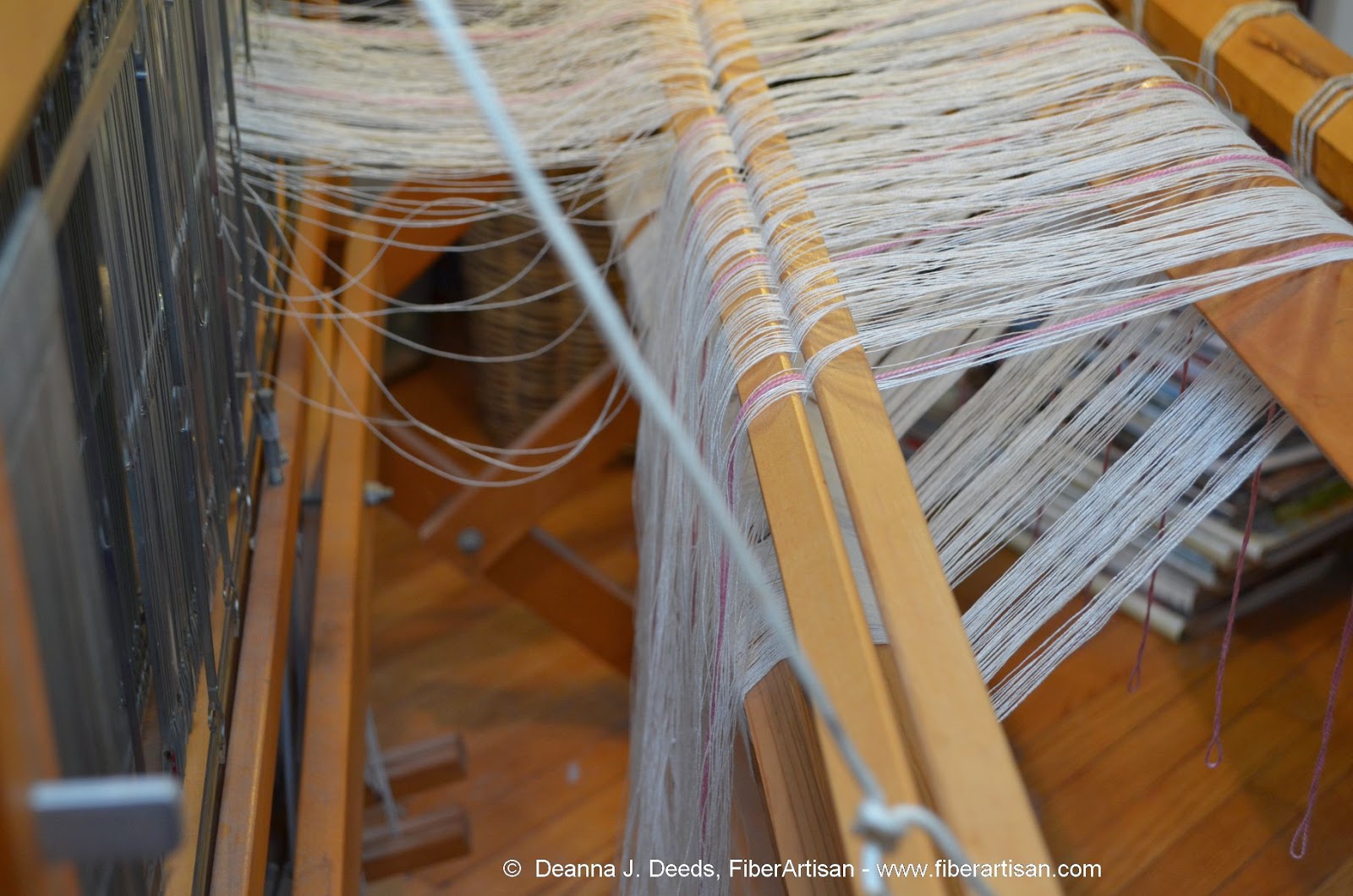 ...and unthread it by pulling the warp out to the back, and you're all ready to thread the next one!
Posted by Deanna Deeds at 6:28 PM No comments: 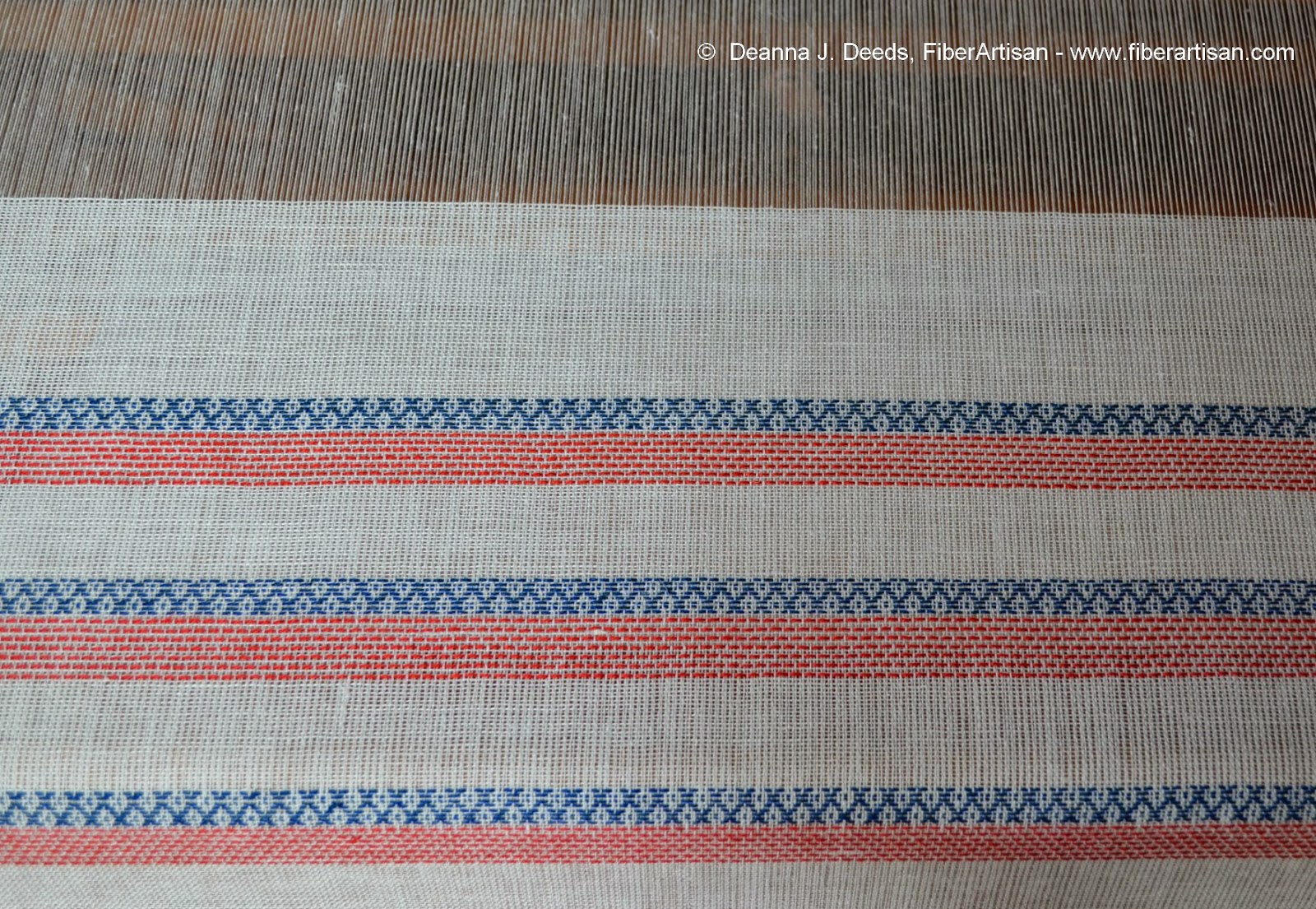 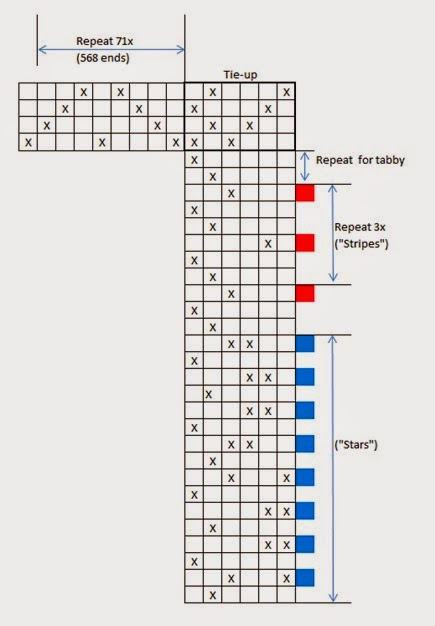 July's Towel of the Month is on the same threading as April's towel, a rosepath threading, but it uses a different tie-up.  It makes a design meant to look like tiny "stars and stripes" reminiscent of the US flag, just in time for our Independence Day.

The warp is again bleached 40/2 linen, 569 ends total.  The "tabby" weft is the bleached 20/1 linen.  The pattern weft called for is the "5-strand floss" which I don't find available, so you can substitute 5/2 cotton in red and blue.

To weave this one, weave 8" plain weave with the tabby linen, then follow the draft to weave the pattern, throwing the red and blue pattern yarns where indicated, and the tabby weft in between as shown.  On one end of the towel, repeat the "stars and stripes" three times total, weaving 26 picks of tabby between each one.  On the other end of the towel, just make one repeat, reversing (do the stars first, then the stripes).

Happy summer weaving!
Posted by Deanna Deeds at 6:13 AM No comments: