My Dance Card is Full 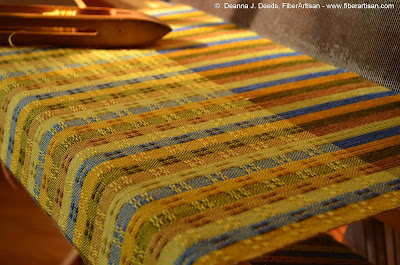 I finished the odd little 11-beat dance with this warp.  This one has a warm yellow weft.  I did two towels in each of four different weft colors on this warp.

I may do it again in a warp using another colorway, in between lots of other projects.
Posted by Deanna Deeds at 4:09 PM No comments: 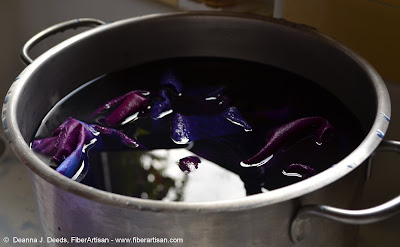 Navy overdye.
Posted by Deanna Deeds at 5:09 PM No comments: 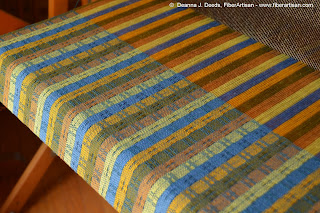 I was weaving this structure last summer, designing the towels that were in the Jan/Feb '15 issue of Handwoven.  I put it on the loom again this week, this time with lots of colors.  I had forgotten how fun it is to weave.  The last shot of each sequence becomes the first shot of the next, kind of like that old jump-rope rhyme where the last word of the verse sounds like it's going to be a naughty word, and it turns out to be the first syllable of an innocent one that starts the next verse.  You kind of lose a beat in the rhythm, which makes it hard to stop once you get going.
Posted by Deanna Deeds at 5:45 PM No comments:

Fuchsia in the dye pot 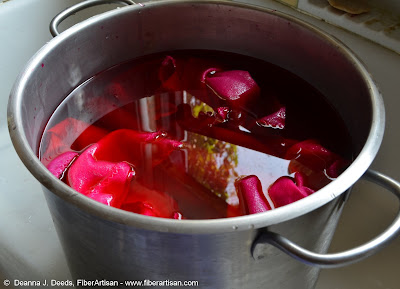 Doing a little dyeing today.
Posted by Deanna Deeds at 3:29 PM No comments:

An Exhibit to View

Warp and Weft, Chain Stitch and Pearl: Textiles in the Ahmanson Collection

I went to see this exhibit last Friday.  There are 30 pieces in the show, from 17 different fiber artists working in many varied techniques including knitting, quilting, embroidery, tapestry, shaft loom and jacquard weaving, felting, sculpture and even photography.  As you walk through the offices to the gallery in the back, there is also a progression of embroideries and quilts.

If you're in the Southern California area I recommend it.  It's at a private business in Irvine but is open to the public during business hours if you call ahead.  Call Fieldstead and Company at 949-474-1965. 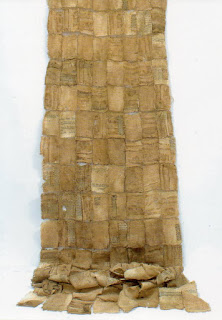 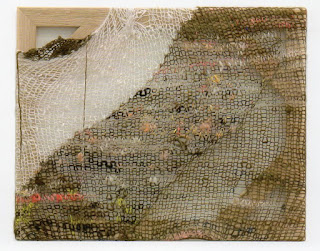 Posted by Deanna Deeds at 4:00 PM No comments:

Tomorrow Will Be Beaming Day 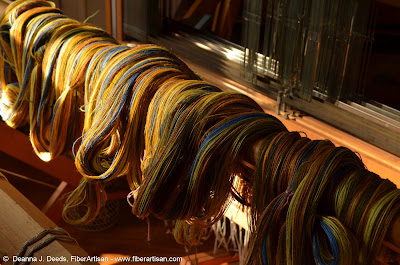 Posted by Deanna Deeds at 5:31 PM No comments: 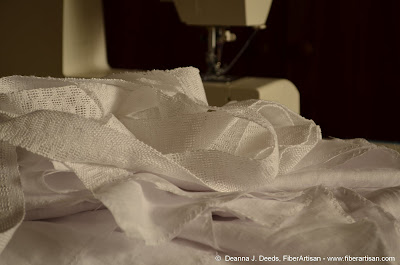 Posted by Deanna Deeds at 5:10 PM No comments:

More lace on the loom 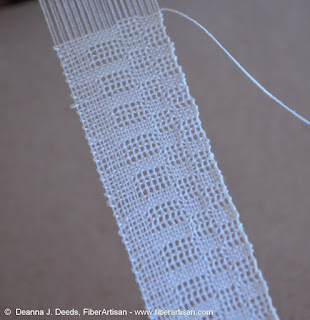 Today I'm making a little edging.  Or I should say I'm making a lot of it.  By 'little' I mean it is not very wide, only an inch and a quarter after draw-in.  But I need a few yards of it for the project I have in mind.

This is in 10/2 cotton warp and weft, 20 epi, 2 blocks of leno/plain weave with a plain weave border on one side which I'll use to attach the lace.

(For SCHGers, a teaser - this is for my CLUE project.)
Posted by Deanna Deeds at 12:31 PM No comments: 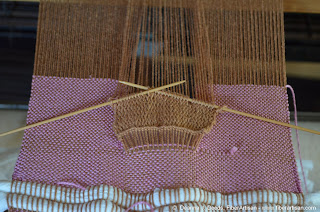 Yeah, I know.  I can not believe I am doing this either.

The structure I am attempting to get is called warp knitting, usually only done by machine in the textile industry.  Instead of one continuous element being worked loop by loop in horizontal rows, the loops are made from many vertical elements.  The loops have to alternately go through loops made by their neighbor elements on one side or the other. 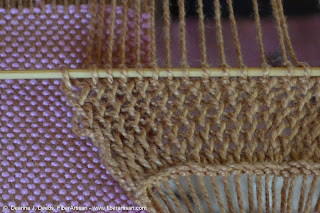 Here I've spread out a section that doesn't have too many errors in it so you can see it a bit better.  As in my other knitting-on-the-loom trials, the warp ends per inch needed for the woven cloth is way more dense than is needed for the number of stitches as this yarn wants to knit.

You can view a diagram of the structure I'm trying to get here.
Posted by Deanna Deeds at 11:27 AM No comments:

Labels: knitting, knitting on the loom 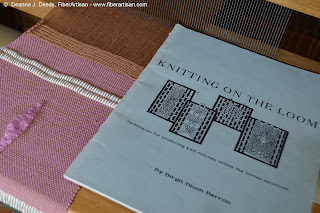 In 1988, Birgit Olson Barron published this booklet Knitting on the Loom: Techniques for Producing Knit Stitches Within the Woven Structure.  She also apparently came to my Guild and gave a workshop, but that was before I even knew guilds existed or what a great resource they are.

This is something I've been wanting to try for a while, and apply it to my methods where I leave portions of my warp unwoven. 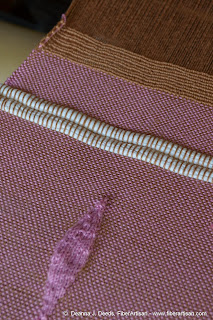 But before I move on to that, I thought I'd work through some of the techniques she introduces in her book.  She suggests using knitting yarns, but my end objective (I think!) is to use weaving yarns, so I started with 5/2 cotton.

Here are two of the samples I've done so far.  The warp is a tan color, with a pink weft.  The one in the lower half of the photo is knitting of weft yarns, and in the upper half (in progress) is knitting of warp yarns.

I had an image in my mind of what working the stitches would be like, but as usual the execution was... different.  You work the weft-knit stitches in columns, not in rows as in normal knitting.  For the weft knitting, I found using a crochet hook worked better than the latch hook she recommends, but the latch hook seems better for the warp knitting. 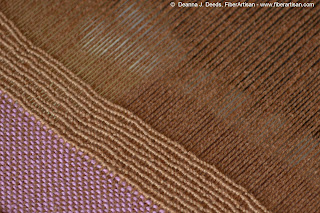 Here's a close-up of the warp knitting.  I think the warp sett that is needed for a nice woven fabric is too close for how the yarn wants to knit up.  So a good candidate for using only a portion of the warp in a layered manner.

I wonder where this path will lead?
Posted by Deanna Deeds at 2:41 PM No comments: 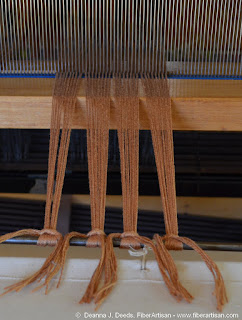 Here is the traditional method that most sources teach to tie the warp onto the front apron rod.  Take sections of warps on bouts, smooth them out so the tension is even, and separate each into two equal-sized groups.  Put the two groups over the apron rod, keeping them separate, and bring one up onto each side of the warp.  Tie the first half of a square knot, or better, the first half of a surgeon's knot (pass the end twice around the crossed ends instead of once).

Then proceed with tensioning and when it's good, complete the square knots if needed for extra securing. 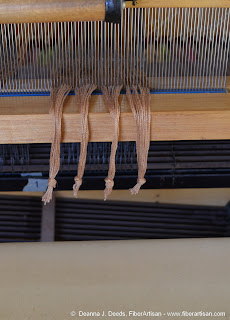 Next I'll show you two alternate methods using shoelaces...  They both start by first tying those smoothed-out warp bouts into an overhand knot at the end. 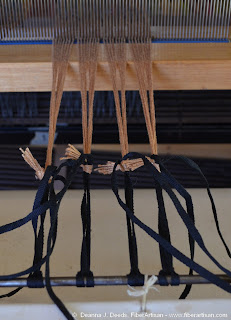 Here's the method that Nadine Sanders (aka the Singing Weaver) teaches.  She calls it "Warping on a Shoestring".  (I'd put a link to her web site singingweaver.com but it seems to be down right now.) Take a shoelace and hitch it at its center over the apron rod. Take a knotted bout, separate in 2 and make a "snitch knot" (lark's head) with the warps, then feed the 2 ends of the shoelace through the snitch knot.

The beauty of this method is the tensioning mechanism.  By just pulling toward you with the shoelace ends, or by separating the two and pulling, the warp is tightened and held in place as the snitch knot constricts, creating more static friction.  You can also see that there is less warp waste than in the traditional tie-on. 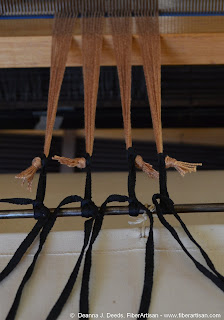 I use shoelaces, too, but it's sort of a hybrid of the two methods above.  Instead of forming the snitch knot with the bout of warps, make a lark's head in the center of a shoelace.  Put this around the bout of warps above the knot and tighten it.  This is similar to the way I attach my warp sections to the strings on my sectional beam.

This method is even more stingy with the warp.  Other than whatever length you use up in getting your warp initially spreaded prior to weaving, that overhand knot is the only wasted bit. 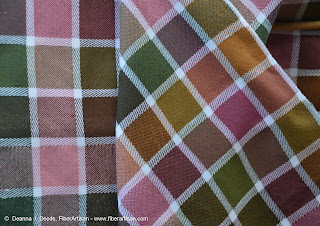 If this were a race between the completion of this blanket and the arrival of the baby, I'm sorry to say the blanket would have won. 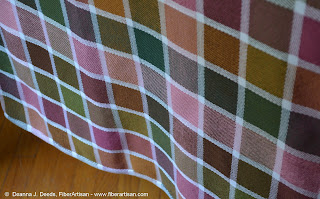 Posted by Deanna Deeds at 4:22 PM No comments: